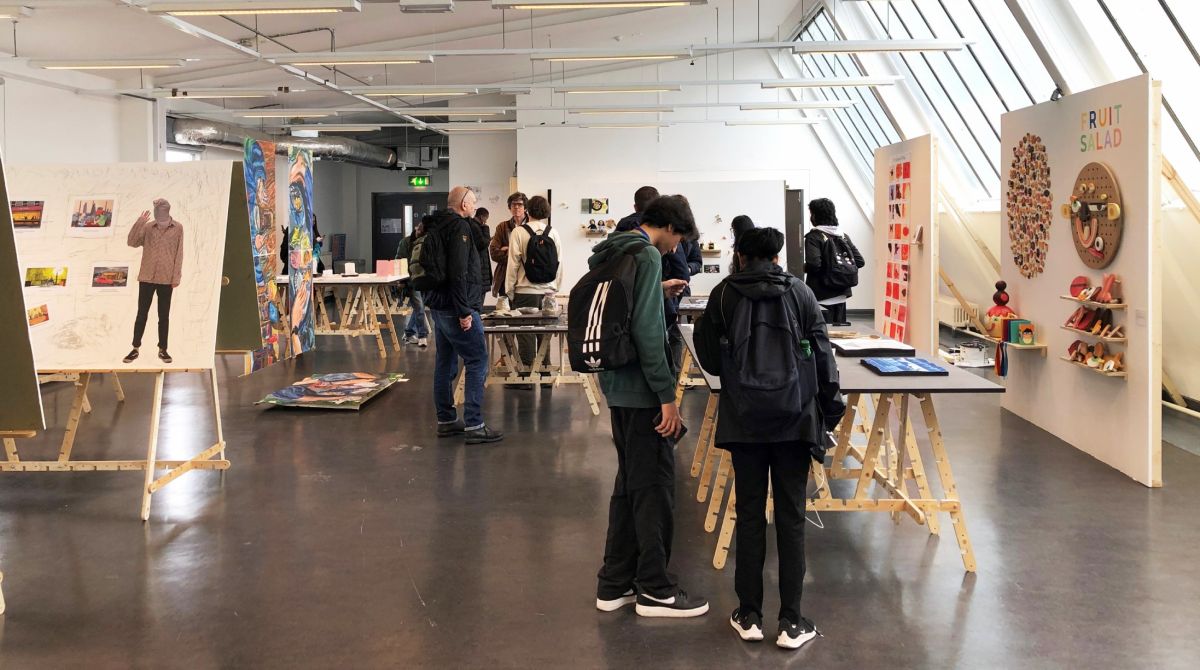 The Kingston School of Art degree show is open from Monday 6 June to Sauday 11 June.

A new theatre for Peckham, rock solid containers made from eggshells and art inspired by agricultural life are just some of the many works unveiled by final-year students at Kingston School of Art's eagerly anticipated degree show. Following two years of pandemic-enforced absence, the studios, corridors and work spaces at Kingston School of Art are playing host to an explosion of creativity, with final year students from the Schools of Art, Design, and Creative and Cultural Industries sharing the culmination of their studies with industry experts and employers.

Dean Mandy Ure said the return of the degree show to campus was a special moment for both students and the staff who had supported them through their courses. "Our students form a unique community of artists, designers, performers and writers. They challenge categorisation, working individually and collaboratively to form new worlds of possibilities while building towards a sustainable and inclusive future and that is exemplified by the work on display," she said. 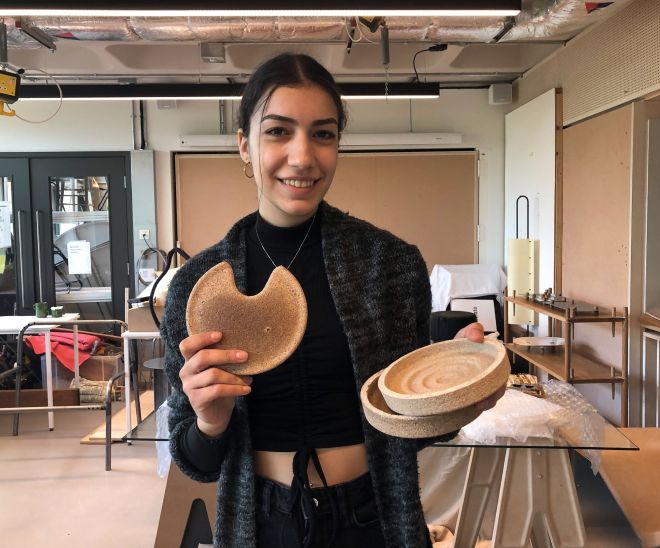 Product and furniture design student Constantina Ilia's 3D printed eggshell containers require 340 grams of eggshell for each piece.Product and furniture design student Constantina Ilia's rustic and utilitarian containers are among an array of ethically themed exhibits. For her final project, she challenged herself to make a product from a biomaterial and, following experimentation with eggshells, gelatine and water, found she could create something surprisingly strong.

The next challenge was sourcing thousands of eggshells, around 340 grams per piece, to put into her 3D printed moulds, with local bakeries, restaurants and cafes rallying to the rescue. "I would call places and they would put their eggshells in a bag for me, so I would be walking around Kingston with bags full of shells," the 21 year old from Cyprus explained.

The containers are available in a variety of different colour tones produced by using used coffee grounds, a waste product also sourced from local cafes. When they have reached the end of their useful life, the containers can be easily disposed. "They are similar to stone when treated. However, this material is not waterproof, so if you put it into soil it will biodegrade and turn into compost," Constantina said. "I'm looking forward to experimenting with larger containers. There are a lot of possibilities – this is just the beginning." 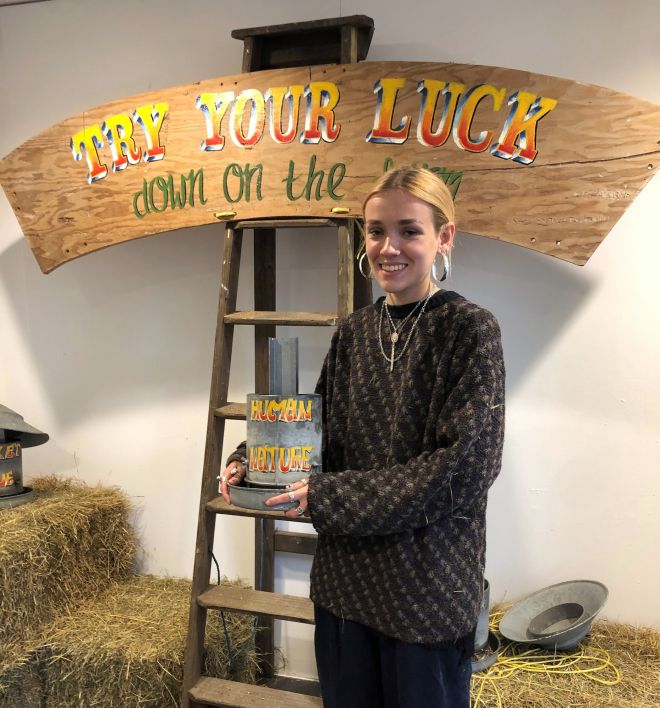 Her family’s farm was the inspiration behind fine artist Astrid Finn-Kelcey's installation.Elsewhere, life on a farm has inspired fine art student Astrid Finn-Kelcey's installation. She has combined fairground signwriting with farming equipment to produce a thought provoking piece featuring hay bales brought to campus from her parents' small holding. "During lockdown I was at home for a few months with no access to studios, so my practice began to be based around the farm," she explained. "There are so many variables that go into farming – the weather, laws, transport to name just a few. I started to equate these risks with gambling, attempting to get the most money available from natural resources. This led me to thinking about fruit machines and slot machines, so I incorporated that into my work."

As many of her pieces were too large to transport to the studios at Kingston School of Art, Astrid has produced a video with images of her work from the farm. "I have created fairground attraction signs for a haunted house, a tea tent and a fortune teller amid more abstract signs about capitalism and gambling," the 21 year old, from Bristol, said. "Farming is all about consistency and hard work and permanence, while fairgrounds go into a field, set up, are bright, garish and attention grabbing and then gone in a few days. It's an interesting clash of cultures." 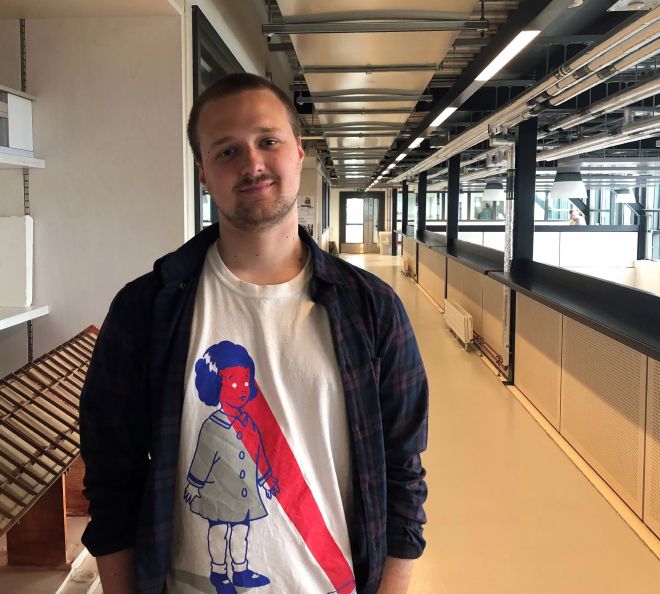 Architecture student Max was tasked by his tutors to design a new theatre for Peckham in South London.Architecture students, meanwhile, have been exploring a variety of scenarios given to them by their studio tutors, visiting sites and showcasing their proposals with handmade models, intricate sketches and digital images created on computer. Max Greenhalgh was one of the students given the task of designing a new theatre for Peckham in South East London.

His design is people-led, with a number of factors influencing his approach. "Understanding the demographic of Peckham and designing with that at the forefront of my mind were key to this project," the 22 year old from Camden in London said. "I wanted to bring a new audience into a theatre and began with an idea of how to move through a space. That led me to the concept of creating an indoor street where people can watch performances in a very relaxed way."

The models and imagery on display at the degree show depict the community watching street performers from the balcony as well as at street level. At the end of the street is a more formal auditorium modelled on The Young Vic in London, due to its flexibility and support for less conventional works. "I've never before been able to blend having an idea with how the structure can really enhance a project and I'm very happy with the way I was able to resolve the two," Max said.
Open to the public from Monday 6 June at the Knights Park campus, the degree show concludes with a special celebratory event on Saturday 11 June.

Alongside the on-site show, a specially constructed website will again showcase the graduating students' work for anyone wanting to explore their achievements in greater detail or is unable to make it to campus. The website, first launched last year, has been nominated for a prestigious D&AD Award thanks to its innovative colour wheel navigation. 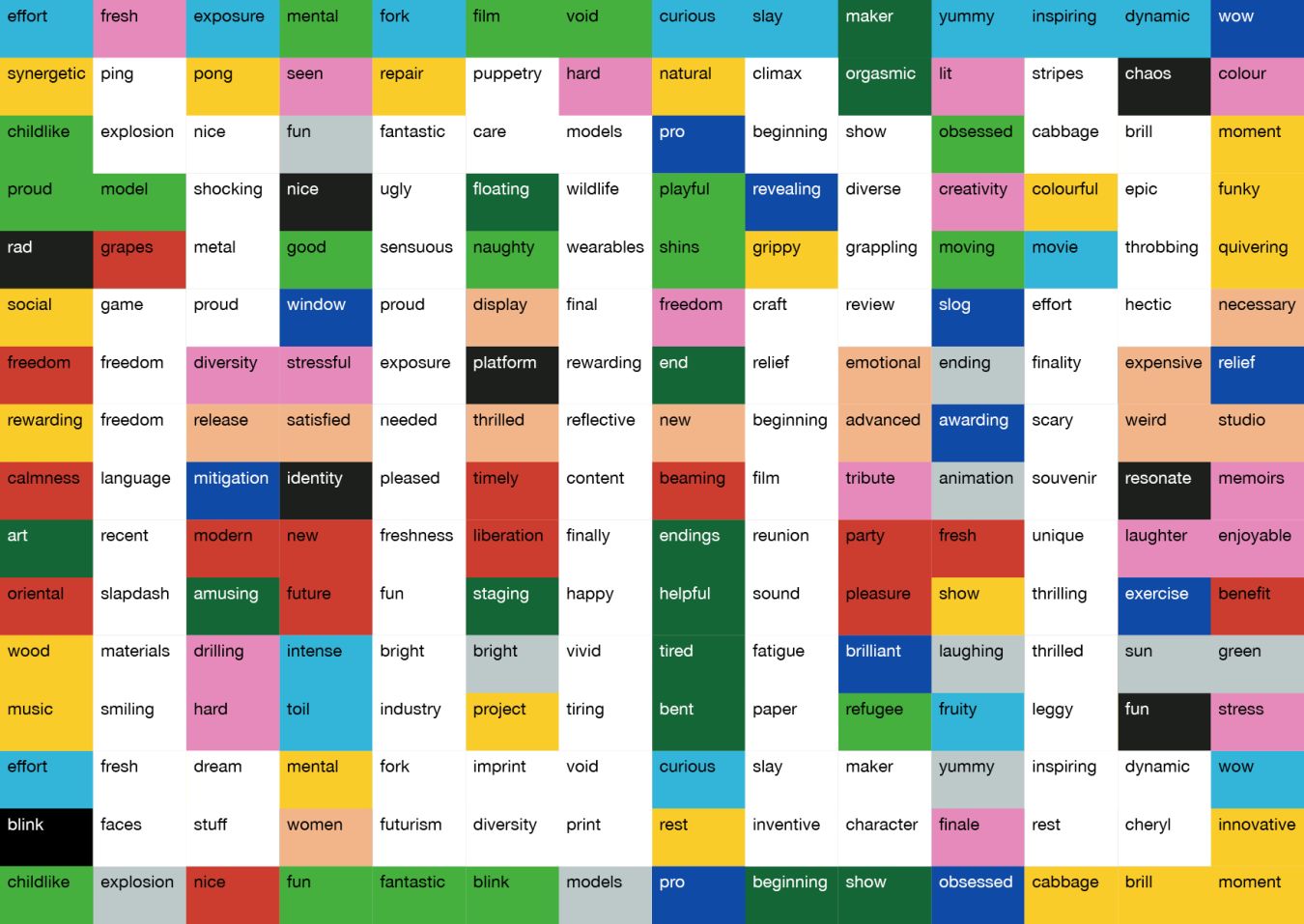 The Kingston School of Art degree show runs from 6 June to 11 June.