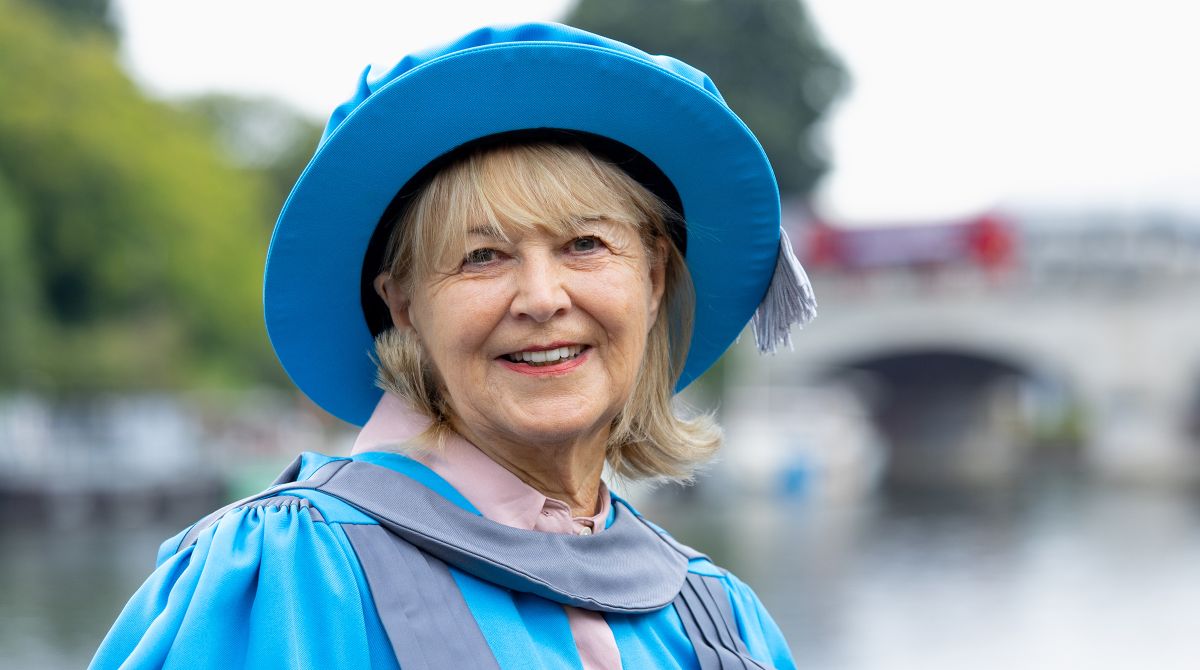 Leading British businesswoman Val Gooding CBE encouraged graduating students to learn, be curious, flexible and above all else never give up, as she shared lessons from her career after being awarded an honorary doctorate from Kingston University.

Ms Gooding, who studied a postgraduate Diploma in Management Studies at Kingston University – then Kingston Polytechnic – in 1981, was recognised for her contribution to women's role in business during a graduation ceremony at the borough's Rose Theatre. A former CEO of health company Bupa, where she served for 12 years, the award-winning business leader had previously spent more than 20 years working across a number of positions at British Airways.

She is currently the Senior Independent Director on the Board of Vodafone plc, having served as a non-executive director of Compass, BAA, J Sainsbury, Standard Chartered plc, and Tui, as well as being Chairman of Premier Farnell plc and Aviva UK.

Alongside these roles she has been a Trustee at the British Museum, the Rose Theatre Kingston, English National Ballet, and the Royal Botanic Gardens, Kew. Ms Gooding also served as a non-executive on the boards of the BBC, the Home Office, and the Lawn Tennis Association. A recipient of several awards throughout her career, she was included in the Financial Times and Fortune lists of most powerful women and was appointed CBE for services to business in 2002.

Addressing graduating students from the Faculty of Business and Social Sciences, Ms Gooding spoke of the barriers she had had to overcome earlier in her career, when women leaders in her field were few and far between, having initially joined British Airways after graduating with a degree in French from Warwick University. "I didn't achieve my first senior management position until I was in my early 30s," she said. "One of the reasons was that the airline's senior executives were, in those days, exclusively male. I can still remember the excitement when the first woman manager was appointed – previously there were none."

A lack of opportunities for promotion led her to make a number of sideways moves during the early part of her career at British Airways, though this did allow her to gain valuable experience in a range of disciplines. She was later approached by Bupa, where she went on to be CEO, and her involvement in the transformation and development of both companies were some of the achievements Ms Gooding highlighted as being most proud of. She also outlined how much her own experiences as a woman in business had changed over the years.

"In the third part of my career, where I've been a non-executive on boards, I've ironically had the opposite experience from that in my early career," she told graduates. "It's actually been an advantage to be a woman, and as a result I've been able to choose very interesting and varied organisations to work with."

Detailing the role Kingston had played in her own development, the business leader spoke of how she was given the opportunity to study at the University on day release during her time with British Airways. "It was hugely valuable to me," she said. "In particular, the statistics and economics we studied were vital, and I used that learning in all my subsequent jobs. The basic structure of business, the universal business language, is numbers, and the Diploma in Management Studies helped me to be fluent in that."

Congratulating this year's graduating cohort on their achievements, she spoke of how exciting a time this was for them, full of choices and opportunities, and shared advice from her own career. "To me, doing what is interesting and enjoyable is better than money or status," she said. "It is what has helped me to progress in my career. Learn, be curious, work with people you like and respect and never give up – I hope you retain an echo of that as you progress."