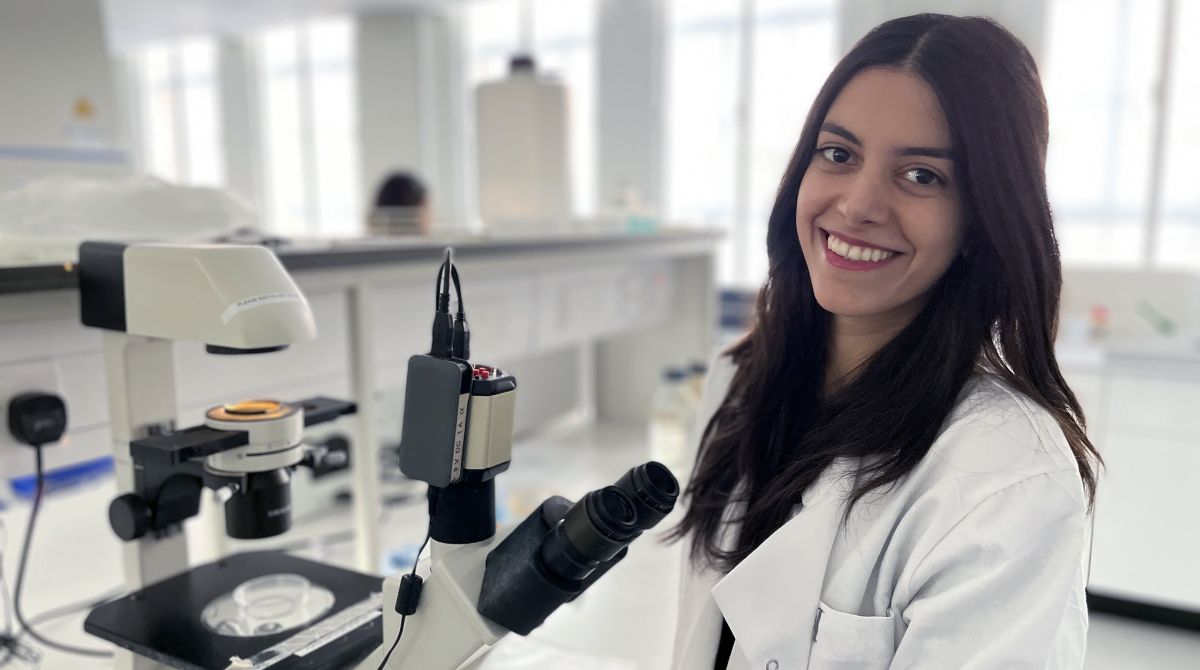 Sadaf Akbari was named among six finalists for the annual contest after impressing judges in the semi-final with a presentation about her research and the potential contribution it could make to healthcare. Through her PhD, she is exploring how smart materials that produce electrical charges under pressure could be ideal for replacing parts of damaged bones within the human body.

Using computer simulations, she is modelling how structures made from these piezoelectric materials, called scaffolds, can be combined with cells from a patient to grow into engineered tissue that could then be implanted between sections of a bone to support its repair.

“Only 30 per cent of patients on transplant lists get the organs they need – it’s a major problem worldwide,” Sadaf said. “Engineering tissue to replace body parts damaged by accident or disease could go a long way to helping those who can’t access donor organs. The materials I’m working with are exciting because the electrical charge mimics what is observed in natural bones, which attracts minerals to aid repair. This strategy isn’t organ-specific, so could be applied to other organs too.”

Sadaf completed an undergraduate pharmacy degree at the University of Sharjah in the United Arab Emirates before undertaking a Masters in pharmaceutical science at Kingston, graduating in 2019. After being inspired by the work of PhD researchers in the Faculty, she found herself applying for a doctorate that combined her biology expertise with a whole new skillset in engineering.

“The possibilities of bioengineering in the world of medicine are so wide-ranging. It’s been a steep learning curve, but I’ve had brilliant support from my Kingston University supervisors,” Sadaf said.

“Testing my designs using simulations can reduce the length of experiments by years and the software also helps identify the best bone parts to target. The most satisfying thing about my research is that it feels as though I’m solving a puzzle – a problem with an answer that just hasn’t been attempted yet.”

Sadaf was put forward for the national rounds of the annual academic contest, first developed by Australia's University of Queensland, after winning the University stage of the competition. It sees PhD students challenged to deliver a compelling spoken word presentation on their research and its significance in just 180 seconds, alongside an illustrative image.

The 29 year old from Dubai is the second Kingston University engineering PhD student to reach the national final in consecutive years, after Ana Pavlovic took home the judges’ prize at the 2021 competition. Sadaf will be competing against students from the University of Manchester, the University of Westminster, King's College London, Newcastle University and Ulster University in this year’s final on 15 September.

Each year research students entering the Kingston University round of the competition work with academic lead Professor Andrea Petroczi and former broadcast journalist and communications consultant Etienne Duval to help develop key communication skills for their future careers. “Sadaf has made the most of her skills, talent and potential and really shone in this competition,” Professor Petroczi said. “To have national finalists in consecutive years is brilliant for the University, but what really matters for us is that every student who takes part improves and develops skills that will help them in their research careers. We’re proud to say that has been the case year on year.”

The training and feedback had really helped when it came to understanding how to share academic concepts with the general public, Sadaf said. “I realised even talking about scaffolds, which I thought was the simplest way of describing what I do, was too technical a term, so I had to work on how best to explain what they are. It feels surreal to have made the final and such an honour. No matter what happens, the exercise has been hugely valuable and the skills I have developed will help with everything from collaborating with industry to funding bids or media work.”

The Three Minute Thesis final will be streamed live on Thursday 15 September at 12pm. Register to watch the final and vote for Sadaf as the People's Choice Winner.