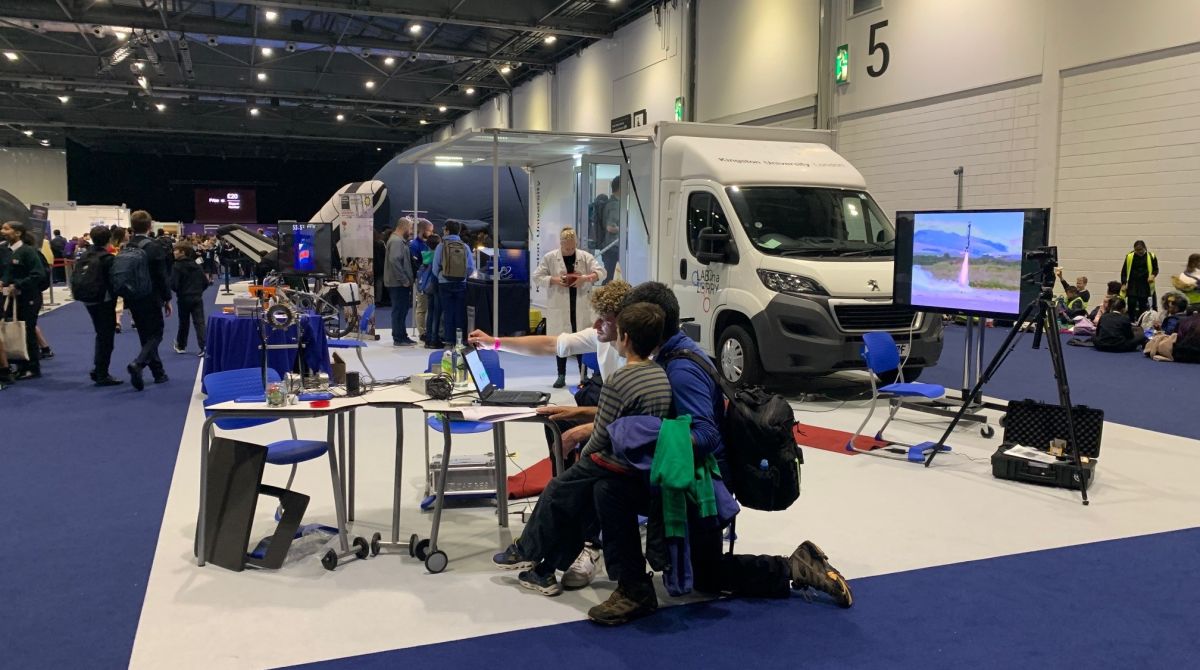 The Lab in a Lorry at New Scientist Live

Science enthusiasts and school pupils were given a taster of some of Kingston University’s innovative engineering, computing and STEM outreach activities during the annual New Scientist Live festival at London’s ExCel Centre.

Thousands of visitors took up the opportunity to visit the University’s stand across the three-day festival, which featured its Lab in a Lorry – a mobile science laboratory that opens up the world of science to schools and colleges across the capital.

Among the activities and demonstrations for visitors to try out and explore within the lab were a wind tunnel that uses smoke to visualise air flow around an aircraft’s wings, remote control vehicles, light microscopes and a chance to build and then launch a Lego car.

Outside the lab there was an award-winning rocket on display developed by students from the University’s Rocket Engineering society for a national launch competition and a model demonstrating how small rockets for satellite launches work. An interactive display also provided an opportunity for visitors to see how high-speed cameras are used within rocket propulsion development. Balloons were blown up and then popped in front of the cameras, with the footage being played back on a large screen in slow motion.

Kingston University academics, staff and student ambassadors from the Faculty of Engineering, Computing and the Environment were on hand for all three days of the event speaking to attendees and demonstrating what the lab had to offer, including senior lecturer in astronautics Dr Peter Shaw.

“Being part of New Scientist Live allows us to share our passion and experience with the next generation, giving a flavour of what careers in science can provide and how we are helping to make a difference to the world through our research, including specialist imaging equipment we are developing for rocket science studies,” he said.

“It was also an opportunity to network with companies across industry and discuss potential partnerships with us in areas such as our new Kingston Propulsion Test Facility.  Festivals like this really do help us to reach a wide range of audiences, inspire future talent and form relationships that could develop future innovations for industry.”

Winning prototypes from the University’s involvement in the annual Primary Engineer competition were also on display throughout the weekend. The contest sees ideas by primary school children from London and Jersey brought to life by a team of technicians and students from the Faculty of Engineering, Computing and the Environment (ECE). This year’s protypes on show included the dual temperature controlled anti harm bicycle helmet, designed to keep cyclists safe, as well as the bicycle sucker, dreamt up as a solution to help communities in African countries take water from wells and carry it long distances.

As well as academics, members of the Faculty’s science, technology engineering and maths (STEM) outreach team attended the event to speak to young people about studying at Kingston University. STEM outreach officer Martin Wood and his team met with hundreds of visitors, particularly on the first day of the event which was specifically open to school pupils. “Working with young people to share the exciting STEM opportunities available at Kingston is vital for the University’s work in narrowing the UK’s skills gap in this sector,” he said. “We met many young people who may well go on to be the next generation of scientists and engineers, and I know Kingston University will continue to support young STEM enthusiasts on their learning and career journeys.”

The 2022 edition of New Scientist Live was a three-day event and the first since 2019 due to the pandemic. The event featured five stages, 56 main stage talks, and 80 exhibitors including Kingston University.