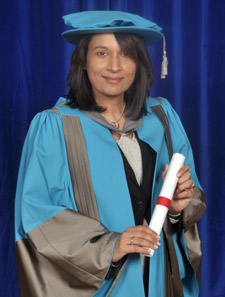 The Chief Executive of the company that manages facilities at the Royal Opera house, lights up Trafalgar Square and is helping Primark go green has been given an honorary doctorate by Kingston University.

Ruby McGregor-Smith, chief executive officer of Mitie, received her award from the University's Faculty of Business and Law at the Rose Theatre in Kingston, today (Wednesday January 19). Ms McGregor-Smith already held a degree in Economics from Kingston and had plenty of advice for those following in her footsteps.

"I would advise new graduates to always follow their passions and instincts and they will excel in their career if they do this," she said. "Also, be open-minded about where you and your organisation can get to - the potential is limitless. Move around - work in different roles, companies and countries as part of your career development."

Mitie, which manages facilities for the likes of Rolls Royce, Vodafone and the Royal Opera House, employs around 60,000 people. It is responsible for cleaning Hampton Court Palace, The Tower of London and the Scottish Parliament, is involved in the construction of the basketball stadium for the London Olympics and has been advising the Metropolitan Police and the London Fire Brigade on reducing their carbon footprints.

Ruby McGregor-Smith joined the company in 2002 and became chief executive in 2007. "She's clearly someone whom our students can identify with," the Dean of Kingston University's Faculty of Business and Law, Professor Jean-Noël Ezingeard, said. "She's a Kingston graduate herself and she's climbed the management ladder to become the first Asian female chief executive officer of a FTSE-250 company. She's well-regarded in business circles and her management style seems to be very well-received by Mitie's employees."

Ruby McGregor-Smith is also chair of the Race for Opportunity Board. "Diversity in the workplace is something I am very passionate about," she explained. "I strongly believe in offering opportunities to the best talent at all levels of an organisation regardless of background or gender."

Kingston University is also committed to widening participation in higher education and the wider workplace. "Some of our students always knew they would go to university, but for others it was something they only realised might be possible later, at school or further education college," Professor Ezingeard said. "Business and Law students from all backgrounds play a part in building the fantastic community of learning we have here."