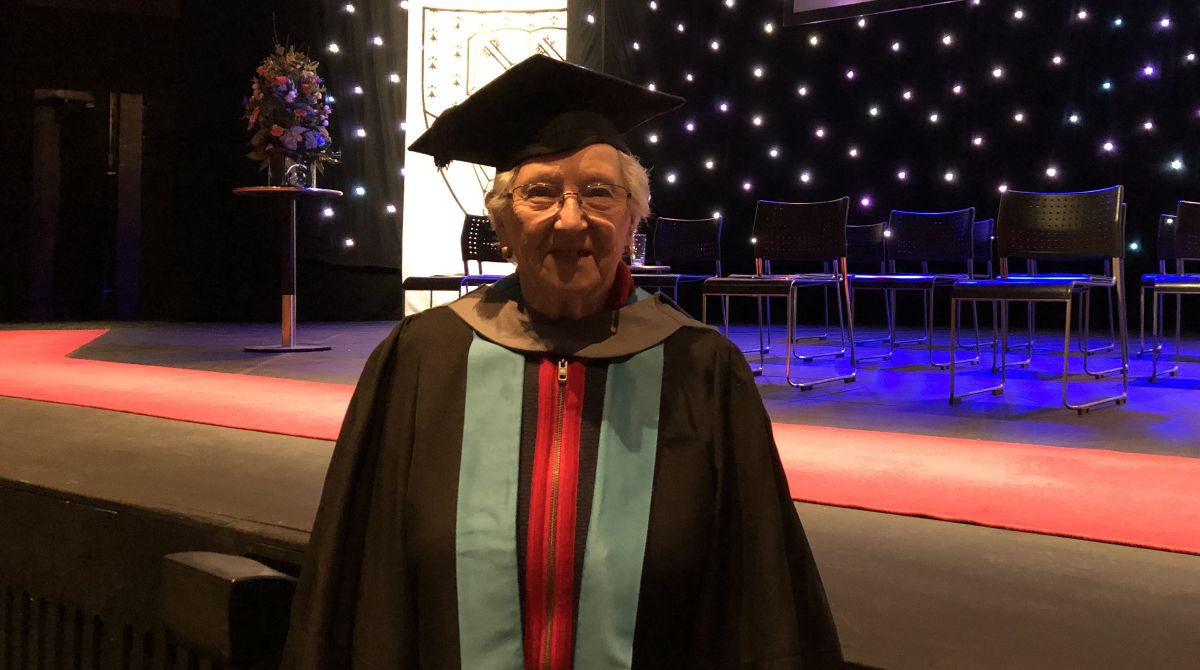 An 86-year-old retired music teacher was among a throng of jubilant graduates who have collected an honorary degree in education from Kingston University – decades after completing their education certificates in the 1950s, ‘60s and ‘70s. Almost 160 alumni returned for a special graduation ceremony held to celebrate their dedication to teaching and to match their award to the current day Bachelor in Education (Hons) received by Kingston's graduates.

In 1954, Marilyn Jackson (née Baxendale) embarked on a two-year teacher training programme at the former Gipsy Hill Teacher Training College when Sir Winston Churchill was Prime Minister. Some 67 years and 16 Prime Ministers later, she was among the excited graduates donning their gowns for their big day and spoke of her delight that the University was honouring its Gipsy Hill cohort. "I was a bit nervous, but very excited and plan to have my degree certificate framed and hung on the wall with pride. I may be old, but I'm very proud to be a graduate," she said.

The grandmother of six said she had been destined to teach and enjoyed a long career working at infant schools in London and overseas, where she also taught music. She got engaged to her husband, Peter, during her time at Kingston, during which time she went on on teaching placements across the capital and made friends for life. "It was quite an adventure for an 18-year-old living away from home for the first time. My roommate and I kept in touch and reunited at a 50 year alumni reunion held at Kingston Hill campus."

After her husband left the Royal Navy, they moved to Kobe in Japan where Mrs Jackson worked as a teacher for eight years, before retiring in 1999. When asked what advice she would give Kingston University's teacher education students, Mrs Jackson said they should plan lessons carefully and show mutual respect. "Always try to enjoy being with the children. They will respond well if you show them the respect you yourself expect from them," she said. "Every day is different and sometimes challenging, but that is what makes teaching so enriching," she added.

Another octogenarian to be awarded their degree was 89-year-old Angela Hardy. Mrs Hardy was a mother-of-two in her forties when she signed up as a mature student at Gipsy Hill Teacher Training College in the late 1970s. She had been to stage school as a child and was a successful dancer in the 1950s, performing across Europe as a member of the internationally renowned Bluebell Girls dance troupe. 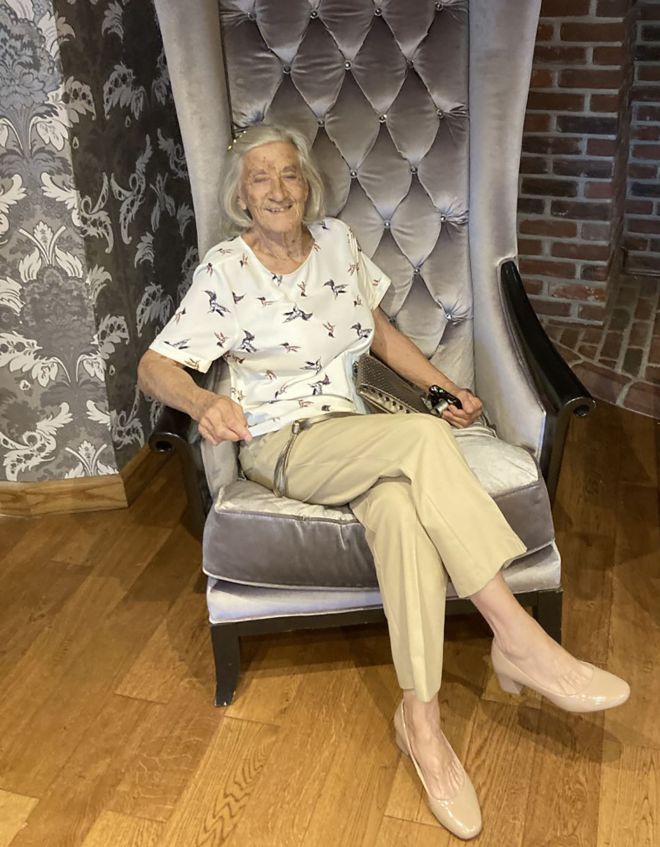 Angela Hardy was in Class of 1979 at Gypsy Hill

It was while working as a school assistant at a special educational needs school in the 1970s that someone suggested she train as a teacher.

"I proved to be a diligent student. I was always handing in assignments on time because I was very conscious of my lack of a formal education. I remember one tutor telling me that he wished every student worked as hard as I did," she said.

After passing her certificate of education, Mrs Hardy got a teaching role at St Phillip's School, a special educational needs school in Chessington, where she stayed until she retired at the turn of the millennium.

As a teacher, she was able to apply her experience on the stage to a different role, daughter Debra Sparham said. "Mum put her theatrical experience to good use and became an integral part in writing and producing shows and pantomimes at the school, which she enjoyed very much," she said.

A total of 450 alumni received an Honorary Degree in Education from the University, with nearly 200 attending the special ceremony at at the ceremony on 17 January, held at the Rose Theatre on the riverside in Kingston upon Thames,  and many others watching the event on live stream.

"These awards are about celebrating the expertise and dedication to teaching demonstrated by hundreds of alumni over decades and rightly honouring them as graduates," Mr Bhargava said.

"Generations of students have followed in their footsteps as trainee teachers in early years, primary and secondary education at Kingston University. They are truly an inspiration to all our teacher education students." 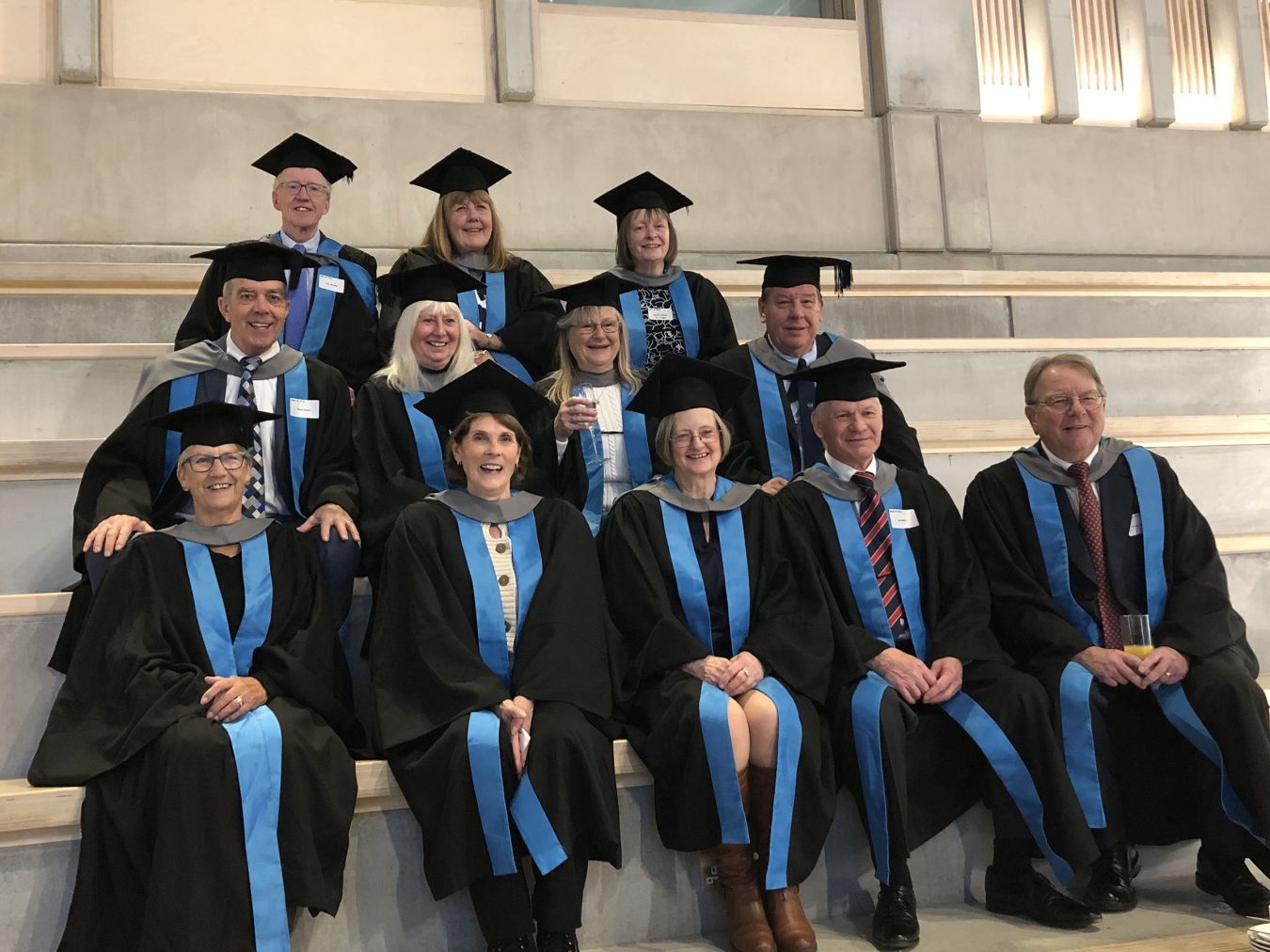