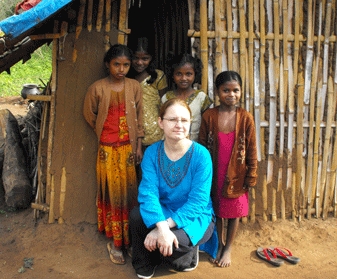 A social work student from Kingston University and St George's, University of London has spent four weeks in India working with victims of human trafficking and domestic abuse as part of a new international education programme. Kate Ofman was one of 10 students who travelled to the southern district of Mysore as part of a scheme allowing her to complete part of her social work qualification overseas.

The visit was Kate's first to a developing country and a rare experience of rural life after growing up in Poland's second biggest city, Lodz. She worked with a charity called the Odanadi Seva Trust which provides accommodation, education and counselling for women and children who have been sold into prostitution or slavery, forced into marriage or have suffered domestic abuse.

Odanadi, which means soulmate in the local language Kannada, also campaigns against the sex trade and promotes its work among the rural hill tribes who are often targeted by traffickers. "It was a real eye-opener for me - I learned how tough life is for poor people in India and how they must fight for everything," Kate said.

The 30 year old, who wants to work in children's services after she graduates, said the experience was something she would draw on in her future career. "It's given me a better understanding of the needs of people who have suffered abuse or violence," she explained. "I hope it will help me to investigate cases with more compassion and ask appropriate questions in a more knowledgeable way." 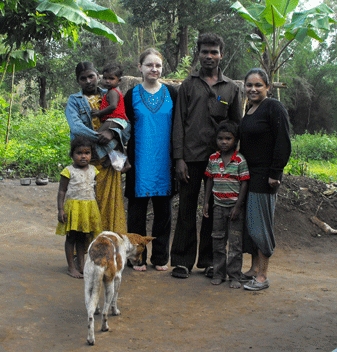 The programme was funded by the General Social Care Council and from a British Council programme known as the Prime Minister's Initiative for International Education that aims to raise students' understanding of other cultures. The organisers paired Kingston University with the University of Mysore and social work was identified as an area in which students from both countries would benefit from learning about each other's cultures.

Kate and the other students spent a week at the University of Mysore learning about the way India is governed as well as issues such as the role of religion, multi-culturism and race relations. Each of the Kingston students, who are in the final year of a two-year Master of Social Work course, then spent just over a fortnight working with a local voluntary organisation - an experience that will count towards the 200 days of practical placements they are required to undertake to qualify as a social worker.

Kate and three other students spent time with Odanadi, four others worked with an organisation called DEED supporting tribal families, one student worked with Parivarthana - a low-cost, rural sustainable redevelopment organisation, and another was placed in a privately-run residential unit supporting children with learning disabilities.

Dr Wilson Muleya, course director for the Master of Social Work programme at the Faculty of Health and Social Care Sciences run by Kingston University and St George's, University of London, travelled to India with the students to help set up the scheme. His lecture on British social work at the University of Mysore was reported in the local paper which led to invitations to speak at four other colleges in the area. "This was a real highlight for me because the students were so keen to hear about how things work in the United Kingdom," he said.

Social work in Britain and India were radically different, with the latter providing very few services for the vulnerable, Dr Muleya explained. The paucity of provision in India meant that most social work students in that country went on to work in industry as human resources managers.

Kate and her coursemates are not the only ones to have been picking up vital skills abroad recently. Other social work students from Kingston have visited Uganda where they have worked with charity TASO (The Aids Support Organisation) helping people with Aids and HIV.