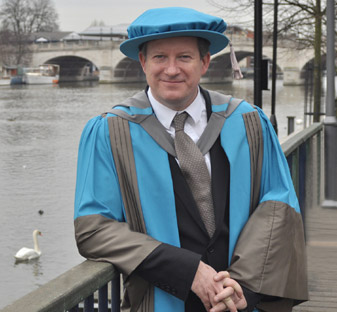 One of the United Kingdom's most high profile choreographers and theatre directors has been named an Honorary Doctor of Arts by Kingston University in recognition of his outstanding contribution to dance in culture.

Matthew Bourne is the creator of the all-male swans production of Swan Lake - the world's longest running ballet, a five-time Olivier Award winner and the only British director to have won the Tony Award for both Best Choreographer and Best Director of a Musical.

Speaking after he received his award from the Faculty of Arts and Social Sciences at the Rose Theatre in Kingston, he said: "Pursuing a career in dance is as exciting as ever, but it is also a huge challenge."  He explained: "I myself was a late starter, and many graduating students may not yet have found their particular talent, or know which direction they're going to take. I want to emphasise how much of a surprise my own career has been, and urge students to stay true to themselves and keep striving for what they want."

He said that some of the work produced by dance students at Kingston, which married  dance styles from a variety of cultures, was unique. "This versatility and cross-cultural mix is something that will make Kingston graduates very valuable in the profession," he added.

Mr Bourne was the Artistic Director of his first company, Adventures in Motion Pictures, from 1987 until 2002.  During those 15 years the company created an enormous new audience for dance with its groundbreaking works both at home and internationally.  In 2002 he launched his latest company, New Adventures, with two highly successful productions:  Play Without Words and The Nutcracker, which became the first ballet to be screened on BBC1 in more than 20 years.

He already has links to Kingston University through his professional colleague Jason Piper, who is the head of dance at the University.  Mr Piper has danced lead roles in Mr Bourne's productions of Swan Lake and Dorian Gray.

Matthew Pateman, professor of contemporary popular aesthetics, said Mr Bourne was a perfect match for Kingston because the University shared his enthusiasm for, and commitment to, the arts. "Kingston is dedicated to supporting, nurturing and promoting the arts - as academic subjects, and through creative projects on a local, national and international level - which is why Matthew Bourne, who is such a brilliant exponent of his art, is so well suited to the University," Professor Pateman said. "Matthew has created a popular art form watched by tens of thousands of people. He has managed to popularise contemporary dance without compromising his vision and we are very proud that he has accepted this award."