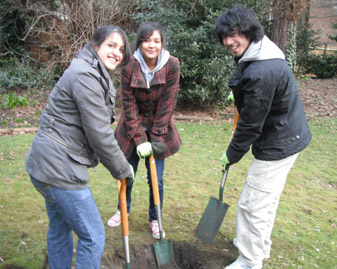 The existing trees in the orchard are estimated to be nearly 100 years old and new apple and pear trees were needed to ensure a fruiting orchard remained on the Kingston Hill site.

The University's Biodiversity Action Group carried out the planting, working with the London Orchard Project  a new initiative to promote fruit trees and orchards in the capital.

The internationally-acclaimed Estonian sculptor Dora Gordine and her husband the Hon. Richard Hare bought the land and built Dorich House - now part of Kingston University - in the mid-1930s. They kept some of the trees and the fruit was used by Dora, a keen maker of chutneys and jams, up until her death in 1991.

A draft of Dora's will from the 1980s, seen by Dr Jonathan Black, a senior research fellow in art history at Kingston University, shows she wanted to have her ashes scattered in her garden, though in the end this didn't happen.  "Dora absolutely loved her garden," Dr Black said.  "She used the apples and plums she grew herself in the orchard to become something of a demon jam maker during the war.  One of Dora's ways of luring people to Dorich House to sit for her sculptures was to use the beautiful gardens and orchard as an enticement." 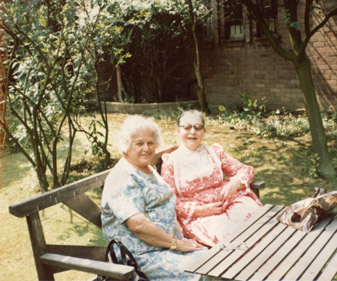 Dorich House Museum curator Brenda Martin said the orchard was a fascinating part of the property's history.  "A friend of Dora's used to collect the apples and use them to make a traditional English dessert called lemon snow for her," she said.  "It's great that we're replacing the trees because Dora and Richard chose to keep these trees when they first built the house."

The new fruit trees selected to be planted are varieties which would have been commonly found in Surrey in the late 19th and early 20th Centuries. Public donations will be used for benches so that people can enjoy the orchard in spring and summer on Museum open days.