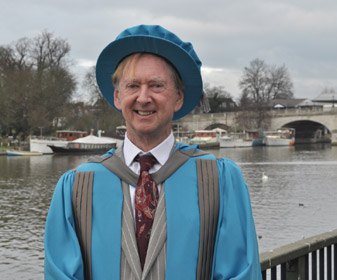 Virology expert Professor John Oxford has said he would be surprised and disappointed if the Government did not recommend flu vaccinations for children under five next year. Speaking after he received an Honorary Doctorate of Science from Kingston University in South West London, Professor Oxford criticised the handling of this year's flu outbreak, claiming it had led to "muddled" policies such as failing to immunise very young children.

The under-fives were offered the jab in 2009 but this winter the Government decided this age group was no more at risk than any other from contracting the H1N1 swine flu. However Ministers were heavily criticised following a number of deaths among infants, including three-year-old Lana Ameen. Lana's father, Zana, a doctor, and his wife Gemma, a nurse, accused the Government of denying children a life-saving jab for the sake of the £6 cost of the vaccine - a charge rejected by officials.

Professor Oxford, who is based at Barts and The London School of Medicine and Dentistry, Queen Mary, University of London, said he had been deeply moved by the Ameen's public appeal. "Although it was too late for their own child, they found the strength to say that other people's children should be vaccinated so that they did not suffer in the way that their daughter did," he said. "We don't want a repeat of this next year. Other countries like Canada and the United States have vaccinated their children and we should do the same." He said it was too late to begin a vaccination programme this year. "However I would be surprised and disappointed if the Government did not decide to vaccinate the under-fives next year," he added.

Professor Oxford, who is also scientific director of his college's research company, Retroscreen Virology Ltd, said this year marked the third wave of a swine flu outbreak that was likely to continue for at least another year or two. He said the virus, which has taken 18 years to develop and is thought to originate from South East Asia, was unusual in hitting people aged under 65 hardest. Older people who lived through major flu outbreaks in 1957 and 1968 were more likely to be immune to it, Professor Oxford said. "Swine flu is reaching the parts that other flu viruses don't, it goes deeper, and that's why we have so many people in hospital with their lungs clogged up," he explained.

Speaking at the graduation ceremony where he accepted his honorary degree - the first in his distinguished career - Professor Oxford told graduates that a science degree provided excellent job prospects and life training. "Every important issue in the world today revolves around science, whether it's climate change or genetic modification," he said. "It's a wonderful discipline because, unlike the arts or humanities, it allows you to say that something is wrong. It provides an attitude to life as well as being a fun and exciting subject."

Although he has since gone on to produce more than 250 scientific papers, Professor Oxford said his career highs included his first publication, on the German measles virus, which appeared in the scientific journal Nature more than 40 years ago. He has been equally excited by the recently published fourth edition of his work 'Human Virology: A Text for Students of Medicine, Dentistry and Microbiology'.

His research has concentrated largely on the 1918 Spanish influenza outbreak, which killed 21 million people worldwide. The project has involved exhuming patients buried in the Arctic permafrost to examine the biology of the virus as well as analysing tissue archives from the Royal London Hospital, Whitechapel. In addition to accolades for his research excellence, Professor Oxford has also been given communication awards by the Society for Applied Microbiology and the Society of Journalists for his skill in explaining the swine flu pandemic to the public through radio and television programmes, including BBC Newsnight and Channel 4's Richard and Judy.

Dr Mark Fielder, an expert in medical microbiology at Kingston University, described Professor Oxford as a leading light in terms of his academic studies and knowledge of virology. "He should be praised for his work in helping scientists, clinicians and the public understand the viral content of the world around them," Dr Fielder said.