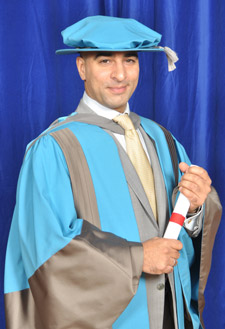 The mastermind behind many of Google's acquisitions and mergers told graduates they held the key to future technological innovations as he accepted an honorary doctorate from Kingston University. Anil Hansjee received the award of Doctor of Computing at the Rose Theatre in Kingston on Friday (21 January) for his work supporting the entrepreneurial use of new computer technologies.

A visiting lecturer at the University since 2004, Mr Hansjee has contributed to entrepreneurship teaching in the University's Faculty of Computing, Information Systems and Mathematics. He told the University's information science graduates that with their degrees under their belt the world was their oyster. "Today's technological innovations are no longer confined to research labs or financial centres, they're happening all around us," he said. "Students have the tools and education to think big, take risks and solve the biggest problems. My advice is to grab your chance and forget your fears."

Mr Hansjee, who was appointed a Visiting Professor at the University in 2009, spent the first seven years of his professional career as a software engineer, first with Swiss bank UBS and then with Chase Manhattan Bank's corporate finance group in both New York and London. In 2006, after time as a venture capitalist, he joined Google as Head of Corporate Development for Europe, Middle East and Africa. Now he masterminds Google's acquisitions and strategic investments in these regions, and manages business relationships with the early-stage technology community and their backers and advisers.

The diversity and practical teaching and research made the University an appealing partner to work with, he said. "I'm delighted to be associated with this University with its philosophy of widening participation, improving co-operation between education and the business community, promoting real-world work placements, practical degrees and commercially relevant research," Mr Hansjee said. "This is exactly what the country needs, in order to stimulate growth. I've actually been tempted to sign up for some of these courses to get a real degree alongside this honorary one, for which I am truly grateful."

Professor Tim Ellis, CISM Dean, said: "Google is the acknowledged leader of innovation in internet technology and the Faculty is delighted to recognise Anil's contribution. He has been an extremely proactive member of the Faculty's industrial advisory panel and is very enthusiastic about engaging with students in lectures on entrepreneurship and innovation in the internet industry."