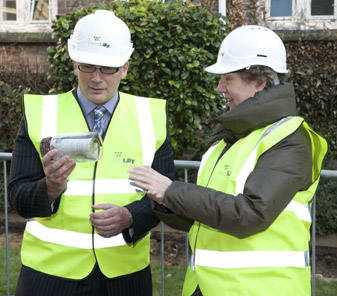 A tiny clump of art history was unearthed at Kingston University when a time capsule from 1953 was excavated from the grounds of the Faculty of Art, Design and Architecture. Rumours that secrets from the decade famous for rock 'n' roll and Dior dresses might be stashed away under the University's Knights Park campus had been circulating for years, but no written record existed to confirm the hearsay.

Kingston's Pro Vice-Chancellor for Research and Enterprise, Professor Penny Sparke, heard about the capsule from an ex-colleague. "I was told by former Dean Keith Grant that the capsule was buried under a stone plinth in the courtyard at Knights Park," she explained. The plinth was erected to mark the coronation of Queen Elizabeth in 1953 and, with work underway to convert the garden in to a new library, builders were asked to check if there was anything inside it. They confirmed there was an object there and, on 22 January, Professor Sparke joined other University staff and students in the garden to see the capsule emerge from its concrete hiding place. 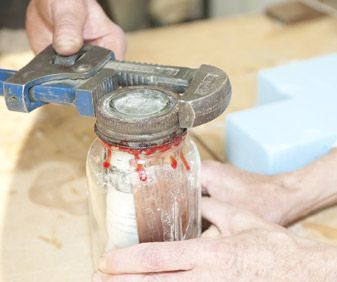 Professor Sparke was presented with the fabled container by construction manager Shaun Frampton.  Inside the wax-sealed glass jar that had not seen the light of day for nearly 60 years were mementoes from the Faculty's predecessor Kingston School of Art - a 1952 prospectus listing courses and tuition fees, an invitation to an evening with the school's Principal and two paper clips, a compass and a drawing pin.

"For me what makes the capsule particularly interesting is that the contents relate directly to the art school," Professor Sparke said. "It gives us an insight into the institutional history - Kingston School of Art was such an amazing place, leading the way in terms of creative education. I love the idea that they put paper clips and a drawing pin inside. They must have imagined they would be obsolete by the time the container was excavated. 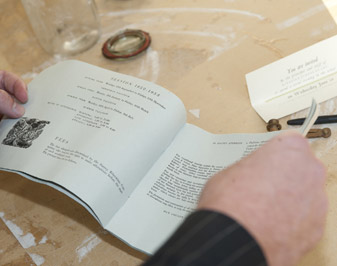 nside the prospectus a list of fees revealed full-time students could study at Kingston School of Art for as little as £15 a year - if they lived in Surrey. For students from outside the county prices rose almost tenfold to £125. The college was a much smaller concern than the University's Faculty of Art, Design and Architecture which now stands on the site, with just 11 full-time staff listed on the brass plaque.

Current Dean of the Faculty Dr Simon Ofield-Kerr said the 1952 prospectus was particularly fascinating. "It's beautiful in terms of its design and illustrations," he said. "It is very much of its time, but it's also a publication we would be very proud to produce today, understated and assured - qualities that are distinctly Kingston."

Dr Ofield-Kerr and Professor Sparke have decided that future inhabitants of Knights Park should have the chance to share in the delights of time travel, and will be re-burying the capsule in the new library - with a few 21st Century additions. University staff and students will be asked to suggest what iconic items or everyday essentials should be placed in the capsule to give tomorrow's historians a flavour of life in the Faculty in 2011.