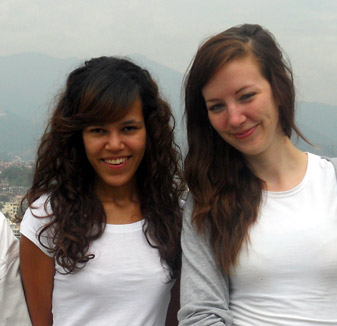 Their pupils had no computers or televisions and their classroom had no electricity or running water, but Kingston University students Jade Gallacher and Alysia Lewis were impressed and motivated by their visit to a rural school in Nepal. The pair joined eight other students from the University's School of Education who spent several weeks teaching at Nepalese schools as part of a new exchange scheme.

Kingston students have volunteered in India, Uganda and other countries in recent years but this was the first year a group had travelled to Nepal. The programme was such a success that organiser Andrew Powell is planning to run it again.

The exchange saw five students teach at Kathmandu University High School and three at Galaxy School, also in the capital. Jade and Alysia, who are in the third year of a BA Hons course in primary education, went to schools in Bayatari, a rural area a day's drive from Kathmandu. For Jade, 21, from Streatham, and Alysia, 21, from Teddington, it was their first visit to a developing country. They were thrown into the heart of Nepalese life, staying with a local family and teaching classes of around 40 six to nine-year-old children at two community schools. Using a few words of Nepalese, they taught basic maths and English as well as songs, stories and games. 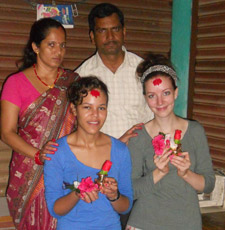 Although their visit to Nepal will not count towards their professional qualification, the students said the experience will enrich and inform their teaching in the United Kingdom. Jade, who spent a year as a teaching assistant in London schools after gaining A-levels at Dunraven School in Streatham, said: "In Nepal the children had pencils and paper but very little else - there were none of the kind of materials you find in primary schools at home - and yet they were really enthusiastic, happy and eager to learn. It's made me more creative about what you can achieve with very few resources."

Alysia, who went to Waldegrave School, Twickenham, and Esher College, Surrey, added: "I had to use actions, expression, movement and pictures to make myself understood by the Nepalese children. It'll help me as a trainee teacher at home, particularly with children who have communication difficulties or speak English as a second language. It was such a worthwhile, eye-opening experience which I will remember forever."

Lecturer Mr Powell, of the School of Education, said the exchange had benefitted the Nepalese teachers as well as his students. "Volunteering overseas is not part of the course but it does give students an extra dimension - they gain experience of another culture and country and quickly need to come to terms with challenges like big class sizes and limited resources," he said. "Teaching in Nepal is very didactic; the children aren't used to asking questions or having discussions. Nepalese teachers came in to watch some of the lessons because they wanted to see how they could make their lessons more interactive."

The exchange scheme has been set up with help from Lekhnath Pathak, an education and languages lecturer at Tribhuvan University in Kathmandu, who comes from Bayatari. He has acquired a piece of land in the rural area where he hopes to build a teachers' and community centre. Mr Powell said the University would help to raise money for the building, which will provide accommodation for visiting students and teachers as well as meeting rooms for local groups.