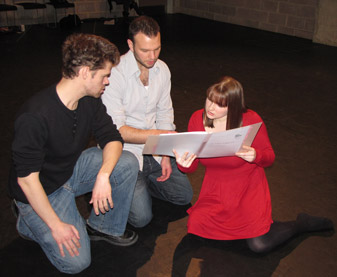 Kingston students will be treading the boards as actors, researchers and directors in the Rose Theatre's forthcoming production of Shakespeare's irresistible comedy As You Like It.

In a unique partnership with the Rose, 10 students from the Classical Theatre MA course will be working with the cast of professional actors, directed by the Rose's Artistic Director Stephen Unwin. Course director Adam Ainsworth said the production offered the students a wonderful opportunity. "They will not only be given an insight into the way professional theatre is made, but they will also help to make it," he said.

Professor Matthew Pateman, Head of the University's School of Performance and Screen Studies, said the positive effects of the partnership could be far-reaching. "In the short term this is a genuine collaboration that ensures our students are actively involved in a professional production in one of the country's best theatres and with one of its best directors," he said. "Long-term, associating ourselves with the arts can only be of benefit to the University - it shows we have vision, it makes people happy and it contributes to the cultural and economic health of the area." 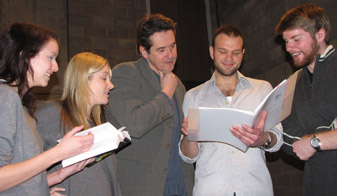 The students have taken on roles ranging from researcher to assistant director. Student Jay Paul Skelton is the Producing Artistic Director for the Notre Dame Shakespeare Festival and is on sabbatical from his job as Assistant Professor at the University of Notre Dame, Indiana. He opted to do the masters course at Kingston to get more practical theatre experience under his belt. "I'm comfortable with shows and theatres of this size and I think Stephen Unwin can rely on my experience," Jay said. "In a way, he can talk to me in a sort of shorthand and I'll understand." Mr Unwin appointed Jay as his assistant director after seeing his impressive CV. Jay has directed, written or produced more than 100 plays, musicals and operas during the past 20 years.

Naomi Marsden, previously a history student, has been researching Elizabethan forests to ensure the production's set is authentic. She said she collated all the research she could find to inform the actors and the location. "Understanding the context is crucial to unlocking the text," she explained. Once she finishes her masters, Naomi would like to go into professional acting. She said the experience of being on set had opened her eyes to what the industry was like. "I'm learning so much watching the actors and watching Stephen direct them," she said. "The actors talk to us about the acting process, and the profession in general - it's going to make the transition from training to professional acting a lot easier." 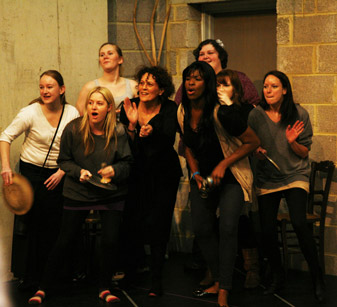 The students will take to the stage in every performance of the production's run, from 18 February to 26 March. According to Mr Unwin, one of the things the Rose is trying to do is break down the divide between the theoretical and the practical. "People do a drama course and don't meet professional actors - it's crazy," he said. "But with goodwill and energy on both sides, that's what we're doing."

The As You Like It Production is an extraordinary event in the life of the theatre, according to Professor Martyn Jones, Pro Vice-Chancellor for Academic Support and Student Services. "One of the things the University wants to do is ensure the theatre is accessible to all and contributes to wider community life," he said. "Having our students work with the theatre in this way is exactly what we have been working towards and we would like to think this is the first of other such events."