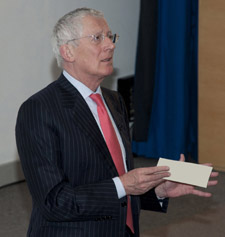 Hewer, Lord Sugar's trusted side-kick on television show The Apprentice, was addressing students at the University's Faculty of Business and Law on the day that Oxford University joined Cambridge in announcing plans to charge the £9,000 a year maximum fee for undergraduates

"It's an absolute outrage because education is a right," he said in response to a student's question about his views on the current government. "These measures will mean that students from poorer backgrounds will shy away from higher education, to their and the country's detriment. And it's very disappointing because some things the Coalition has done have been quite brave."

Kingston University prides itself on widening participation in higher education. All the students in the audience for 'An Evening with Nick Hewer' on February 9 had been specially invited because of their roles as student mentors, or leaders of university clubs and societies. Many students in the 300-strong audience in the Lawley lecture theatre at the Kingston Hill campus belonged to the first generation of their family to attend university.

"The work you've all been involved in is very relevant to employers," he told them. "It's interacting with people, it's team leadership, it's all sorts of initiative taking activities. If you've got someone who's got a 2.1 or a 2.2 and they've taken the straight old path all the way through - fine. If you've got a student who's done something extra then that plays to his favour, especially when times are tough."

Mr Hewer also hit out at law firms that only employed graduates from more traditional universities. "The reason why they only employ people with Oxbridge firsts is because they probably got Oxbridge firsts themselves. What I'd encourage you to do is join another firm and prove yourself there. Then when you do join one of the big names, make sure you open it up to people from other backgrounds." 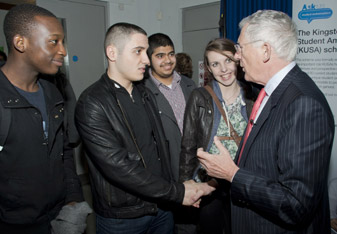 In future, more people might choose to work before going to University, Mr Hewer suggested. "Alan Sugar and the last government put in a lot of time promoting apprenticeships. Not the traditional five-year apprenticeships but, something that would get the pre-student sector of the population involved with a particular industry - and stop them drifting," he explained.

Hewer has become a surprise television celebrity in his sixties. For more than three decades he ran his own Public Relations agency before selling it in 1998. In 2004, Lord Sugar persuaded him to come out of retirement to take part in The Apprentice by promising that he would negotiate his fee from the BBC. "The irony was exquisite," Hewer told the Kingston students. "For all the years that my company had worked for Lord Sugar, I'd struggled to get him to even raise the rate he paid me each year. Now, he was promising to bargain with the BBC on my behalf."

It's hard to imagine how The Apprentice would have turned out without the half frowns, sucked in cheeks and raised eyebrows of Lord Sugar's astute observer.  He admitted that even he doesn't know who the business mogul is going to fire each week, saying "I have no idea. Neither do the producers, neither do the cameramen, nor does anybody else for that matter. And, I tell you what, that's a hot, horrible place. The only person who knows what's going on is Lord Sugar. I'm as much in the dark as the man sitting watching the programme on his sofa in Rotherham." 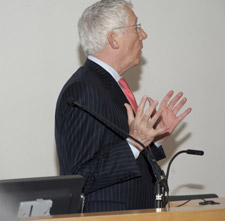 He told the students how he and fellow adviser Karren Brady spent several hours briefing the peer on how the candidates had performed in their tasks during the preceding two days. "He asks us to tell him everything everyone has said or done, everyone they've spoken to and everything that's been said to them, because he has not seen one foot of film." Lord Sugar then condenses their advice down to two sides of A4 paper.

"We will say to him before the final boardroom things like 'You really ought to try to get rid of that one, because he or she is hopeless'. But by the time he's interrogated them in the final boardroom, he's so ruffled everybody's feathers that we're all confounded about who he's going to fire."

Kingston's Director of Academic Development Mike Hill said it had been heartening to hear what Hewer had to say. "It vindicated a lot of what we've been trying to do in terms of helping students get the most out of their degrees and make them as attractive as possible to employers. We believe that when students become course representatives or start mentoring other students they grow in confidence themselves - and that's one of the things that improves both their eventual degree result and their employability."