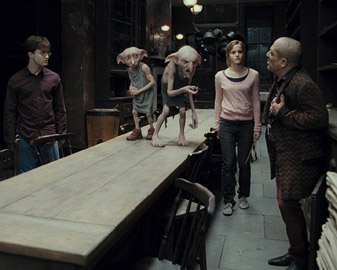 Kingston University illustration graduate Christian Manz is dusting down his tuxedo in preparation for this year's Oscars. The 36-year-old visual effects supremo has been nominated for an Academy Award for bringing the elves Dobby and Kreacher to life in movie blockbuster Harry Potter and the Deathly Hallows Part 1.

Manz is a supervisor at Framestore, the largest visual effects and computer animation studio in Europe, based in Soho in central London.  When the film was shot, Toby Jones and Simon McBurney played the roles of Dobby and Kreacher. The Framestore team then had the painstaking task of removing the bodies of the two actors and replacing them with the animations they had created. "It's rare to have the chance to work for 16 months on one project," said Manz. "There were only about 60 of us which, believe it or not, is quite a small team." Despite all the months of work, the two characters only appear on screen in a handful of scenes during the two-and-a-half hour film.

Dobby had appeared in one of the previous Harry Potter films but the character becomes more serious in the latest instalment so director David Yates wanted him to be redesigned to appear more 'human'. "Dobby is a central character in part one of the Deathly Hallows, as he dies at the end," said Manz. "We created more than 300 different facial expressions for him." 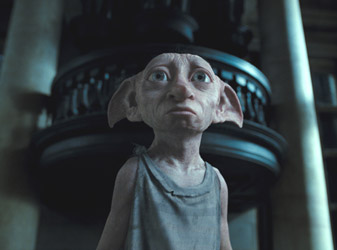 One scene proved especially challenging. Harry Potter and his friends, including Dobby, have to escape from a knife that has been hurled at them, by magically vanishing into thin air.  Although, for cinema goers, the disappearing act takes just a few seconds, the Framestore team experimented with 100 different effects before they felt they had captured the right look for the scene.

In the following scene, the group magically reappears on a windswept beach. Harry (Daniel Radcliffe) realises that Dobby was hit by the knife, he cradles him in his arms and they talk briefly before Dobby dies. On location, Dobby was again played by an actor, who was much larger than the animated Dobby. So when the special effects wizards got to work they found that the actor had obscured much of Radcliffe's body. This meant Christian Manz and his colleagues had the task of 'recreating' bits of Radcliffe's clothes, arms and hands.

"It was such a crucial scene, we knew we had to be perfect down to the tiniest detail," said Manz. "As Dobby passes away we made his eyes appear watery and we slowly changed the texture of his skin texture to make him appear wan and pale."

Manz was one of only two people from the five different visual effects companies hired to work on the movie to be afforded the honour of actually being cited on the Oscar nomination. He was also nominated in the BAFTAS and received a glowing tribute from the overall visual effects supervisor, Tim Burke. 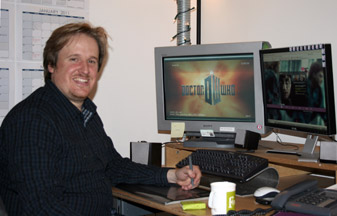 "The Framestore team breathed new life into Kreacher and Dobby - both funny and moving, joyful and sad. They created some truly memorable moments in The Deathly Hallows Part 1. I am thoroughly thrilled with their work," said Burke, himself a previous Oscar winner.

Christian Manz joined Framestore a few months after graduating from Kingston University in 1997. "One of my tutors did some work at Framestore. I visited once in my second year and thought 'Mmm this would be a fun place to work'," he said.

Little did he know he'd work for the studios for more than a decade, providing visual effects for such titles as Nanny McPhee, the third and fourth Harry Potter films and the Golden Compass. He also designed the current Doctor Who title sequence and created all of the creatures and effects in the first three series of ITV's Primeval.

Jake Abrams, principal lecturer at Kingston University's Faculty of Art and Design and Architecture, still remembers Manz from his student days. "Christian was a grafter, a real grafter, but he was also very talented and had enormous charm. And that's a pretty difficult combination to beat whatever career you decide to go into."

The Faculty is no stranger to the Oscars or BAFTAs. In 1994 Tim Watts, who graduated in 1990, won a BAFTA and was nominated for an Oscar for his short film The Big Story: A Tribute to Kirk Douglas. And, in 2006, Claire Billet, from the class of 1998, was part of the Aardman Animations team that made the Oscar-winning animation Wallace and Gromit: The Curse of the Were-Rabbit.

At the Oscars, The Deathly Hallows Part 1 is up against Alice In Wonderland, Hereafter, Inception and Iron Man 2. Whilst the Framestore team continue work on Part 2 which is being released this summer, Christian has begun work on 47 Ronin for Universal.  The film is a Samurai epic set in 18th Century Japan starring Keanu Reeves. "People think my job is all about stunning effects but sometimes you actually don't want people to see what you're doing," he said. "In this case, I want people to really believe that Shepperton Studios are imperial Japan and not to be distracted by thinking about where it was filmed."