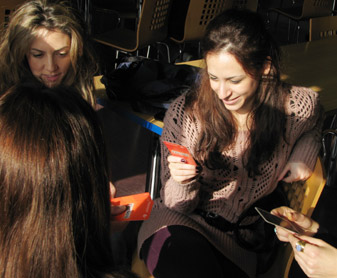 Remember Top Trumps? The card game was a popular playground pastime in the days of space hoppers, chopper bikes and flared trousers - and has recently made a bit of a comeback. Originally Top Trump sets featured cars, planes, dinosaurs and footballers, while the modern ones are often linked to television programmes. Now a new version of the card classic has been launched by Kingston University focussing on a very different subject - sustainability.

In just the same way as traditional trumps compared the speed, length and weight of fighter jets or sports cars, Eco-Construction trumps look at the qualities of different construction materials - qualities such as the toxicity, durability and ease of recycling. New Aluminium, for example, trumps Steel on recyclability scoring 90 per cent but performs far less well in some of the other categories: it requires nearly five times as much energy to mine, manufacture and transport.

The game was developed as a teaching tool for surveying students by Kingston University PhD student John Clarke, with the help of Ash Ghafoor from the University's web and multimedia team. "It took me six months to research and collate all the data for the cards," Mr Clarke said. "At this stage of the project my calculations are provoking debate among sustainability experts, which I see as a very positive thing and will inform further development of the cards" 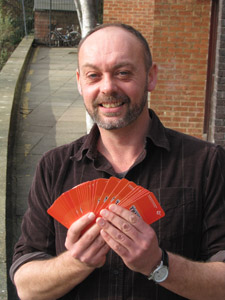 Mr Clarke's father was a builder so he grew up with an interest in construction and the built environment. He's worked on sustainable construction projects in Japan and at the Centre for Alternative Technology at Machynlleth in mid-Wales and has taught at the Pestalozzi village in East Sussex which trains scholars from the developing world.

"When I became interested in eco-construction, one of my biggest challenges was to persuade my Dad," he said. "He was a self-employed businessman who spent his working life trying to keep his costs manageable, so it took a while to persuade him that, what initially seemed a more expensive, sustainable building material could make more economic sense in the long run. But now Dad's come round to my way of thinking, I'm confident I can win over anyone."

The aim of the game is for players to try to take all their opponents' cards. They do this by choosing a category from their top card which, they hope, will 'trump' the other players. For example, from the Concrete card, the player might choose to read "Landfill Decomposition - 50 years". That would trump Roofing Felt, which takes 80 years to decompose, but not MDF, which takes just four years.

"John's trumps are an excellent teaching tool," Kingston University senior research fellow Paul Micklethwaite commented. "They get the point across that a material which offers an environmentally-preferable solution to one design challenge may not be appropriate for a different project. I always ask my students 'is there such a thing as a sustainable material?' - this game forces them to address that question head-on," he added. 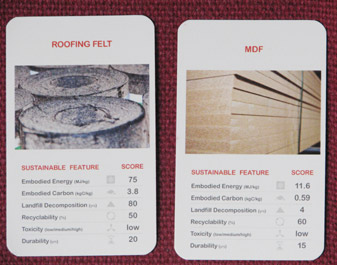 Kingston University's School of Surveying and Planning has printed two thousand sets of the 33 card trumps for use as a teaching tool. Visitors to EcoBuild, the world's largest event for showcasing sustainable design and construction practices, at the start of March, were also able to play the game. But Mr Clarke believes the cards have applications beyond education.

"I'm hoping they could be useful for builders or architects when specifying materials -either at the office or they could carry a pack of the cards in a jacket pocket as a quick reference guide to assess the viability of different materials," he said.