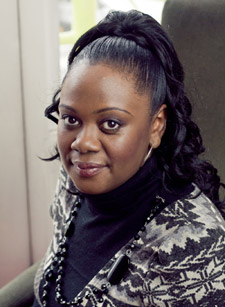 A single mother-of-three who left school at 16 is in line for a prestigious nursing award for inventing a life-saving aid for patients with mobility problems. Neomi Bennett, 39 developed her device for helping people at risk of deep vein thrombosis while she was a student at Kingston University and St George's, University of London.

Neomi, who has just completed a three-year Diploma for Higher Education in Nursing, is one of two finalists for the RCN Fellows Student Nurse Award run by Nursing Standard magazine. The winner will be announced on 28 April at a dinner and award ceremony at The Park Plaza Westminster Bridge Hotel in central London.

Neomi, who is starting a new job at Trinity Hospice in Clapham, south London, in March secured her nomination after writing about her invention, which consists of a slippery inner sock that helps users put on anti-embolism stockings. The stockings are very tight to help prevent blood clots known as emboli forming in the legs and travelling through the bloodstream to the lungs or brain, causing damage or even death. The stockings are frequently prescribed to bed-bound patients, post operative patients and those with reduced mobility.

"I came up with the idea while I was on a placement in the community and saw a patient and relative struggling to put on anti-embolism stockings," Neomi explained. "Patients are often left to their own devices - one woman was so afraid to ask a nurse how to get the stockings on that she ended up using them as curtain ties. That seemed terrible because the stockings can be a life-saver."

Neomi experimented with different materials to create a slippery inner sock that goes under the stocking and helps the patient slide the garment up their leg. She has applied for a patent on her device, created a trade name 'Neoslip', and is hoping the idea will be taken up by commercial manufacturers. A grant from a social enterprise company has allowed her to produce a DVD demonstrating how the product works.

Neomi, who lives in Earlsfield, south London, decided to train as a nurse after working for a computer company. "I enjoyed the contact with customers and liked tailoring things to their needs but wanted to do something more rewarding," she said. After working as a trainee health care assistant at Epsom Hospital, she did an access to nursing course at Croydon College and a diploma in health and social care at South Thames College.

"Leaving school without qualifications meant I wasn't very confident academically so I had to take lots of small steps to become a registered nurse but Kingston and St George's have been really supportive," she said. "It's been a challenge but it's been the best thing for me, and it's inspired my children." Neomi said she hoped her children Tashan, 20, Meshack, 16, and Indiyah, 8, would follow her in going on to higher education. Indiyah was now a bookworm, she said, after taking books out of the university's children's library when she accompanied her to study sessions.

She added: "I'd like to inspire other people to go to university, especially those that didn't do well at school. It takes courage but you have to just take that jump and go for it and, if necessary, take it in small stages - you'll get there in the end."

Nursing lecturer Beattie Dray said that over the last three years she had seen Neomi blossom and grow into a professional nurse and role model. "Neomi is a shining example of the impact of both a university education and joining a profession such as nursing," Mrs Dray said. "Not only has she developed and produced a new product, but she is now beginning her nursing career, where she will make a positive difference to vulnerable people's lives every day."