A driving force for a greener future 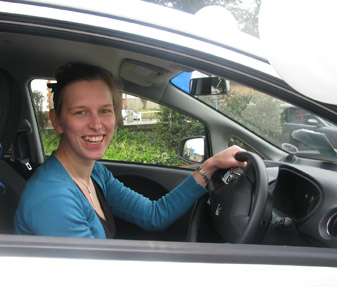 Kingston University staff and students have been getting behind the wheel of what could be a car of the future as part of a campus-wide Go Green Week.   The initiative is in its fourth year and consists of a number of specially themed days throughout the week.  For instance, 'Travel Light Tuesday' is aimed at encouraging low carbon travel to and from the university's sites and beyond.

As part of Go Green Week, students and staff had the opportunity to test-drive a brand new electric car, the  Peugeot iOn, which has been on display at the Penrhyn Road campus.  The car was launched on 3 March and there are only 500 in the United Kingdom.

"The idea is that as part of Go Green week we want to raise general awareness of environmental issues with staff and students," said Dr Stuart Downward, course director for environment and sustainable development at the university's Faculty of Science.   "We want to promote sustainable transport to and from the university.  A lot of people drive here - but they should think about car-sharing, cycling or the electric cars on offer.  The longer term idea is to get charging points for electric cars installed on campus."

Rachel Burgess, a 30-year-old student completing Kingston University's Sustainable Development BSc (Hons) degree took the car for a spin.  "I think events like this at the university make people interested who otherwise wouldn't bother researching low carbon travel or electric cars," she said.   "It was great to get a test drive - the car is unbelievably quiet, smooth to drive and it's probably the future.  I think the university is very good at this kind of event generally - there are lots of green initiatives going on, compared to other institutions.  Having the Sustainability Hub, a dedicated team trying to keep the university on the right path environmentally, is great." 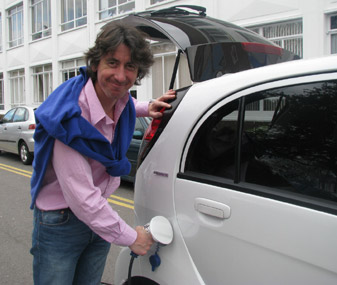 The University's Sustainability Hub, which works to increase the environmental awareness of staff and students, was also offering free breakfasts to anyone who cycled in on the day.  The hub acts as a focal point for all aspects of sustainability across the university and works to develop local, regional, national and international links.

Different themed days across the week are aimed at helping to achieve the university's sustainability goals.   One of the main organizers is Hannah Smith, the university's sustainability projects co-ordinator. "This is the fourth year we have had Go Green week and we usually time it close to national Climate Change Week," she said. "We always get plenty of interest from both staff and students, with 95 people taking advantage of our free cyclists' breakfast this year.  This isn't the time to get too technical with people or bombard them with science, we have other events for that.  But we do want to reward any kind of behaviour - even the smallest thing - that addresses the issues."