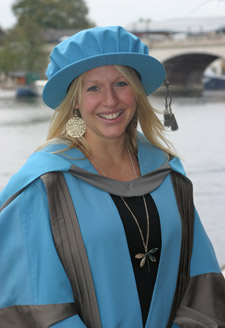 Former Olympic and Commonwealth badminton champion Gail Emms has been named an Honorary Doctor of Science by Kingston University in South West London. Best known for winning a silver medal in the mixed doubles at the 2004 Athens Games, the sports star received her award in front of hundreds of graduates at Kingston's Rose Theatre in a special ceremony earlier today.

After playing her first game of badminton at the tender age of four, Gail rose through the ranks to represent England for the first time in 1995. Following her success in Athens, she went on to scoop gold medals in the mixed doubles in the 2006 Commonwealth Games and International Badminton Federation World Championship before announcing her retirement after the 2008 Olympics in Beijing.

The 32 year old, who graduated from Kingston with a degree in sports science in 1998, said she had loved her time at the University and had been delighted to return to her alma mater to accept the award. "When you retire from sport it's easy to forget what you've done so it's very special when people recognise your achievements," she said. News of her honorary degree had come through just a few days after she had learned she was to receive an MBE for services to badminton. "I just thought 'This is the best week ever'," Gail said.

Gail is already a star of University's Wall of Fame, which celebrates the successes of Kingston's high-flying alumni. Studying sports science at Kingston had helped her career as a world class badminton player no end, she said. "As a professional athlete it gives you that extra bit of knowledge about physiology and anatomy. You feel one up on your competitors," she explained. Her degree had also helped her personal development. "I grew up while I was at Kingston, I learned how to live on my own and it gave me the confidence to take on the world," she said. 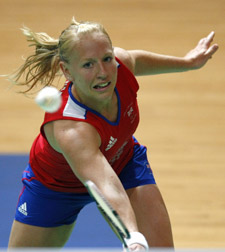 Now based in Milton Keynes, Gail still keeps in contact with many of the friends she made at Kingston. "Ours was quite a small course, about 20 or so of us, and I'm still in touch with half of them," she said. "The way we bonded and interacted, it was just so much fun and made my Kingston degree studies one of the best times of my life. Our lecturers had a lot to put up with - we were a rowdy bunch! Returning to Kingston to collect my honorary degree brought back many special memories of my time here," she said.

Gail now works with the charitable Youth Sport Trust, helping inspire children, particularly those with low self-esteem or behavioural problems, to take part in sport. An ambassador for Badminton England, she is also heavily involved in promoting the sport and coaches some of the country's best female players. She also actively supports the anti-doping charity 100% Me, which promotes the values of athletes who compete drug-free, and is patron of breast cancer charity Bosom Pals.

Although she will not be competing in the 2012 London Olympics herself, Gail believes the Games will undoubtedly inspire more young people to take part in sport. "I went to two Olympics and I know the huge buzz that comes from taking part," she said. "I'll miss that experience but, if I was going to compete, I would want to win and I'll be 35 by then so not at my physical peak." She hopes the Olympics will have a lasting effect on sport in the United Kingdom. "I want any child watching the Olympics who says 'I want to do that' to be able to go somewhere within a few miles of their home to pursue a sport, whether it's badminton, archery or swimming," she said. "It's so important that there is a legacy beyond the medals." 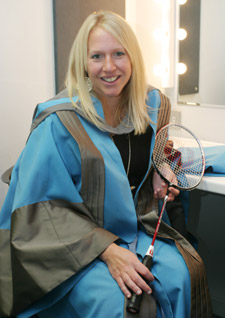 Kingston University's Deputy Vice-Chancellor, Dr David Mackintosh, said naming Gail an Honorary Doctor of Science was a particularly fitting way to recognise her outstanding contribution to sport and society. "To achieve a good degree while competing as an athlete at international level requires a great deal of hard work and self discipline," Dr Mackintosh said. "To this day, Gail still works hard as a mentor and ambassador for sport, supporting young and promising players. She is an excellent role model for our students - all the more so since she is a Kingston graduate herself."