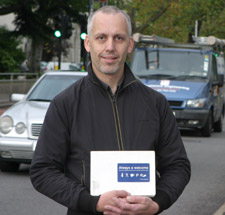 He has clocked up more than 11,000 miles and visited 80 motorway service areas during the course of his research into their architectural history and interior design. So when a special event was staged at Watford Gap on the M1 to mark its 50th anniversary earlier this month, Kingston University expert Dr David Lawrence's name was right at the top of the guest list.

Dr Lawrence, the Head of Kingston's School of 3D Design, knows better than most what a landmark moment the half century is for Britain's motorway services. He estimates he has spent a good three months of his life exploring the various establishments dotted alongside Britain's high-speed roadways. While most weary travellers would regard them as little more than somewhere to grab a quick cuppa, a bite to eat and a chance to use the conveniences, Dr Lawrence begs to differ. To him they are fascinating places, with their own unique design and sense of identity, providing an intriguing snapshot of the ebb and flow of daily life.

Not surprisingly, for a man who quips that he has probably had more motorway breakfasts than hot dinners, Dr Lawrence has retained a particular soft spot for the place where the nation's love-hate relationship with motorway services first began. "When Watford Gap first opened back in 1959 it was definitely something of a novelty. In fact, it was the first 24-hour café some people living in villages in Northamptonshire had ever visited," he explains.

Run by family-owned company Blue Boar, it became a favourite haunt of commercial drivers and pop stars alike. "All the big name performers of the 1960s used to meet there on their way to gigs," Dr Lawrence says. "Watford Gap was even the first place the Rolling Stones were photographed outside London when they stopped off there in 1963 on the way to a television appearance in Birmingham." Legend has it that guitarist Jimi Hendrix had even heard of the Blue Boar, as it was often known, although he mistakenly thought it was the name of a nightclub in London. Sir Paul McCartney, Dusty Springfield, Roy Orbison and James Brown were among other famous musicians to pass through its doors. 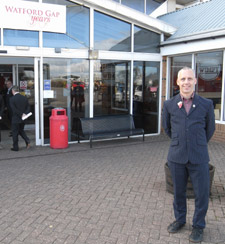 Dr Lawrence contends that far too little has been made of the history of the nation's roadside pit-stops, which are often disparagingly dismissed as nothing more than soulless concrete structures. "Motorways were a key symbol of Britain's technological, cultural and financial progress and changed the face of domestic tourism, allowing drivers to cover far greater distances much more quickly," he explains. "Service areas such as Watford Gap contributed to both the economy and road safety and provided enormous potential for design to respond to the artificial landscape of the motorway itself. They reflected the exuberance of high-speed private motoring in the 1960s and the way that phenomenon clashed with staid officialdom, yet connected with the commercial world."

There is a raft of evidence to support Dr Lawrence's case. He cites the adventurous approach to engineering that led to the development of a 65 foot tower complete with restaurant on the M6 at Forton, Lancashire, opened in 1965. Its operator Top Rank Motor Inns wanted to attract customers for dining and recreation, in addition to providing a stop-off for travellers. "Towers were a popular symbol of progressive architecture in that era," Dr Lawrence explains. "The design was also reminiscent of an airport control tower and therefore carried positive associations with air travel - the most exclusive form of transport." Elsewhere, top designer Terence Conran was enlisted to fit out the Captain's Table Restaurant built on a bridge straddling the M1 at Leicester Forest East, where day-trippers came from far and wide to sample freshly-caught fish served up by waiting staff wearing nautical uniforms.

Further examples include the Washington-Birtley Taverna, just south of Newcastle. Not only were its hostesses trained in deportment, manicure, first aid and even how to deliver a baby, they were also responsible for helping motorists heat up food in some of the first microwaves available to the public in the United Kingdom. Other stand-outs include the service station at Newport Pagnell where parts of the film Charlie Bubbles, starring Liza Minnelli and Albert Finney, were shot and Dr Lawrence's personal favourite, Tebay in the Lake District, which to this day boasts locally-sourced produce and on-site farm stores.  "For most of us, they are simply there when we need them and forgotten when we don't," he says. "But motorway service areas are amazing examples of the way in which design and everyday life come together. Like them or loathe them, they have a special place at the heart of British popular culture and and have been the scene of many family gatherings, community meetings, cultural happenings and even some less salubrious wheeling and dealing over the years."

While service areas have endured a fall from public grace during the past couple of decades, Dr Lawrence is confident the future looks brighter for their next half century. He should know - he has been enlisted to help advise major operators such as RoadChef, which took over Watford Gap in 1999, how to overhaul their image and spruce up their approach to customer care. The changes have ranged from partnerships with High Street brands such as Costa Coffee and WHSmith to the introduction of free wi-fi technology. "The extension of the motorway network and the convenience of modern vehicles allows us to stop less often and be more discerning about where we do. We've come a long way in the past 10 years in understanding the nature of the services motorists expect in the 21st Century -  and operators have signalled a real commitment to upgrade them to match. I'm confident this means Watford Gap and other service areas up and down the country will remain beacons on the motorway map for many years to come," Dr Lawrence says.