The mystery baby depicted in a valuable bronze sculpture by Dora Gordine has been identified after more than 60 years. 'Happy Baby' formed the centrepiece of Kingston University's groundbreaking exhibition of the sculptor's work in 2009, after lying forgotten in Holloway Prison for around half a century, but the identity of the cheerful tot had always puzzled art historians.

Actor Jasmina Daniel had spent very little time in Britain during the past 30 years. She had no idea the fruits of her childhood modelling stint had created such intrigue, until she came across a piece by the Latvian-born sculptress in Worthing Museum and decided her to look her up online. "My parents were good friends of Dora and her husband Richard Hare," Mrs Daniel explained. "My father commissioned Dora to make a sculpture of me when I was barely a year old. It sat in my parents' hallway for years - I had no idea anyone else would be interested in it." 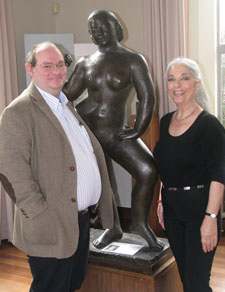 Kingston University art historian Dr Jonathan Black has been trying to find out who the unidentified infant was since rescuing the bronze from Holloway Prison two years ago. "I was certain 'Happy Baby' was sculpted from life, but no one had any idea who the mystery model was," he explained. "I was amazed when Jasmina got in touch. She'd found information about Kingston University's 2009 exhibition of Dora's work online and read that I had been researching her work."

'Happy Baby' was installed in Holloway's first mother and baby unit in 1948, but was moved to an administration wing during refurbishment in the 1960s. Until now, it was believed prison visitor Rosalie Holmes, who campaigned for better conditions at Holloway during the 1930s and '40s, had commissioned the piece and persuaded the prison's first female governor to display it.  But Mrs Daniel revealed Dora Gordine created the bronze at the request of her father Abdul Hossein Hamzavi. According to Mr Hamzavi, the governor of Holloway Prison came to visit Dora whilst she was working on the sculpture and is said to have exclaimed, "This will melt the heart of the hardest mother, I must order a copy for my prison."

"Dora led us to believe Holloway's cast was the original and only version of 'Happy Baby' - she even marked on it '1 of 1'," Dr Black explained. "But I'm not surprised to hear her story isn't quite accurate - things aren't always what they seem with Dora."

Mrs Daniel's father was a Persian diplomat based in London. He married her mother, Joe Joe, an English model, in 1941. "Dora was very cosmopolitan and liked to surround herself with people she thought were interesting and exotic," Dr Black said. "She had many friends in the diplomatic set and there are records of her and Richard attending a reception at the Persian consulate in March 1939 hosted by Jasmina's father."

Mrs Daniel remembers visiting Dora and Richard at their Kingston home as a child - travelling from Kensington in her parents' white Thunderbird with red leather seats. "I remember going to lavish parties at Dorich House with my mother and father. It was fascinating for a young child to be in this beautiful house surrounded by noisy grownups," she said. "I was mesmerised by Dora's precisely sculpted kiss curls - she was frightening and intriguing all at the same time."

Mrs Daniel returned to Dorich House, now a museum of the sculptor's work, last month for the first time since her childhood. While there she revealed 'Happy Baby' was not the only Gordine piece her father commissioned. The critically-acclaimed artist also sculpted a bust of Jasmina's mother Joe Joe, a piece that no one had known about before. "My mother didn't like it very much, but my father loved it," Mrs Daniel said. "She was very elegant, but that hid a shyness. Perhaps Dora captured that vulnerability - maybe that's why my mother didn't think it looked like her." Mrs Daniel owns the original cast of 'Happy Baby' and the bronze bust of her mother. "The baby sits outside my kitchen, my husband often rubs it's tummy for good luck," she said.

Dora Gordine retreated from public life after the sudden death of her husband in 1966, rarely corresponding with anyone.  The last Mrs Daniel heard from the sculptor was when she received a wedding present from her in 1969. "She sent me a copy of one of Richard's books. Inside she'd written 'To Yasmina, with best wishes and love from Dora, May 1969'."