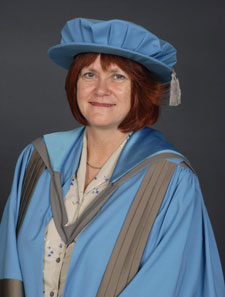 A leading nursing expert has been awarded an Honorary Doctorate of Science by Kingston University and St George's, University of London in recognition of her outstanding contribution to the profession.

Jane Salvage received her award from the two institutions' Faculty of Health and Social Care Sciences at the Royal Festival Hall .

A former editor-in-chief of the Nursing Times, Ms Salvage also played a key role in co-ordinating the Prime Minister's Commission on the Future of Nursing and Midwifery in England. She is a visiting professor at the Florence Nightingale School of Nursing and Midwifery, King's College London, and works as an independent consultant and policy activist.

"If you had told me, when I started my nursing career, that I would ever stand on a platform in the Royal Festival Hall in such grand robes to receive such an honour, I would never have believed you," she told the audience at the graduation ceremony.  "When I went into nursing I had no real idea of the amazing opportunities and experiences it would bring, but I did have an idea that I wanted to help people. I also knew from bitter experience the key role that nurses play at crisis points in people's lives, when my beloved little brother Guy died in hospital. I knew I was entering a noble calling." 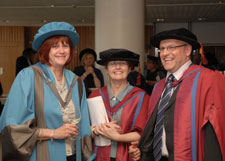 Ms Salvage says her commitment to social justice is her main professional motivation. Nursing in London's East End sharpened her understanding of the politics of health and the need to tackle inequalities and create equal opportunities. She subsequently developed her expertise in a wide range of roles and contexts, specialising increasingly in overseas development with a particular focus on countries in central and Eastern Europe and the former Soviet Union.  She still maintains her overseas interests, but more recently has been working on nursing strategy and policy back home in England. Ms Salvage is currently editor of NMC Review, a new journal published by the Nursing and Midwifery Council.

"To be a good nurse requires a rare combination of using your head, hands and heart," she said. "It seems so obvious to me that I cannot understand why many people, including some who really should know better, think that nursing should not be a degree-level profession. They talk about the need for compassion as though it can be separated from skill and critical thinking."

Among her many publications, she is probably best known for her 1985 book, The Politics of Nursing, which she wrote at home on a portable typewriter while building her career as a nursing journalist.

Associate Dean for Research in the Faculty of Health and Social Care Sciences Professor Vari Drennan praised Ms Salvage for her enthusiasm and commitment to nursing education.  Jane Salvage is a hugely influential nurse leader who has contributed to advancing nursing in a wide number of roles throughout her career," she said.  "Whether it's through publishing, writing, or her government work she has made an extremely positive and significant impact on the profession."