Game on at Kingston University 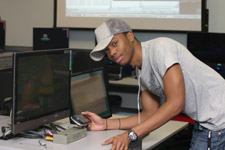 It's every child's fantasy - a room full of Xboxes and PSPs, big screens, secret Sony software and the freedom to go and play. At Kingston University this dream has become reality since the doors opened on a new state-of-the-art laboratory aimed at providing the next generation of game developers with the skills needed to take computer gaming into the future.

According to Kingston's games technology field leader Darrel Greenhill such big players as HMV predict that in just a couple of years they will be selling more games than music. "The console games market is a fast-evolving, multi-billion pound industry," Dr Greenhill said. "We want Kingston students to be at the forefront of the exciting developments in this important market."

The laboratory provided a setting that simulated the hi-tech business of games development where brainstorming and bouncing ideas off each other was essential, Dr Greenhill explained. "The students can work together taking on a variety of development roles and can use a lot of different equipment simultaneously - all of which reflects what they will find in the real world," he added.

Specialist software supplied by games giants Sony and Microsoft gives students using the lab hands-on experience with the latest technology. Xbox and hand held PSP games consoles, as well as the development technology that links the consoles to PCs, are available on every desk in the new facility.

Much of the software, Dr Greenhill confirmed, was so sensitive that students were even warned about confidentiality issues before lectures started. "Having access to the most up-to-date development hardware and software means that Kingston students are working to industry standards even before they've left the classroom," he said.

Computer science and games programming student Ivan Kabunga from Lewisham said the new equipment was allowing him to turn programming theory into digital reality.  "My course is quite theory-led and the new equipment is helping me to get great practical experience," he said.  The 23 year old hopes to move into the games development industry when he graduates, specialising in fast-paced action role-playing games.  "I've been building landscapes for 3D characters to explore and it makes such a difference to be able to work on the programming and the images at the same time," he said.

Three pairs of large projector screens in the laboratory allow students to study code and graphics at the same time.  Dr Greenhill said: "This solves one of the major problems we had with teaching games code. Before, when we only had one screen, we had to show the code we had written first and then switch to a view of the graphic," he said. "Now we have the two screens side by side so we can display the code and the corresponding image together."  The screens are also linked to computers so that the students' work can be displayed for discussion with their colleagues and lecturers.

Thanks to the rapidly-growing and increasingly sophisticated digital market, degrees in games development were becoming ever more competitive, Dr Greenhill acknowledged. Having the most comprehensive technology at degree level was critical if the University's students were to remain at the leading edge of the industry. "The skills that students will take from digital media degrees at Kingston will provide the key to open up a multitude of careers doors including creating special effects for film and television, web development, informatics and popular music," he said. "We offer both games programming and games technology degrees here and from 2010 students will also be able to study games development at postgraduate level. With the new courses and our new games lab, I would definitely say we are ahead of the game at Kingston."