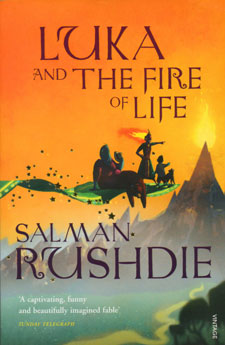 A Kingston University student has illustrated the cover of the latest paperback by Booker Prize-winning novelist Salman Rushdie.

Sir Salman and his publishers Random House were so impressed by 22-year-old Ben Tobitt's work - entered in an animation competition run jointly by the publisher and Kingston University - that they commissioned him to produce the cover for 'Luka and the Fire of Life'.

Ben, from Wimborne in Dorset, set out to produce a bright, colourful design that would catch people's eye. "I wanted to tap into the Boy's Own adventure feel of the book," he said. "The cover needed to be bold and exciting, promising adventure and magic inside."

Last October, Random House invited a group of Kingston's third year illustration and animation students to meet Sir Salman and produce a set of short animated films based on one of the chapters in the novel. In December, the students met the writer again and he selected the film he enjoyed most. But before the second meeting, the publisher approached Ben and asked him to design the cover.

"It was really unexpected because all our focus had been on the films," Ben - who has now graduated - said. "It's only really sunk in now I can walk into shops and see my work on the shelves." 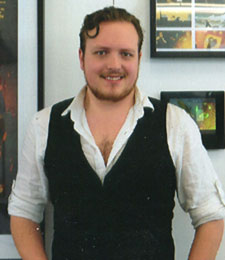 Although Ben had submitted a series of images as part of the animation competition, he was asked to come up with a completely new design for the book. "They said they wanted to see all five main characters on a flying carpet and the sky had to be a fiery golden yellow," Ben explained. "I then sent them a selection of rough designs and they chose the layout they liked best."

Senior lecturer in animation Damian Gascoigne accompanied the Kingston University students when they met the author. "I think Salman Rushdie loved the way Ben got so deeply into the book," Mr Gascoigne said. "He showed a level of engagement that couldn't fail to please the author, and a confidence in himself that led Random House to believe he could manage a very prestigious commission."

Ben admitted he didn't get to spend that much time with Sir Salman himself. "So I can't spill any juicy details," he joked. "But he was a charming and funny man who seemed intrigued to see what we had done and how we had interpreted his work."

Since finishing his university course in June, Ben has been keeping very busy. He's teamed up with several fellow Kingston graduates to work on a feature film, a comic and a series of educational films about the Tower of London. "My classmates at Kingston University were fantastic," he said. "Not only did they influence my work but having a competitive, friendly studio environment really helped me along."