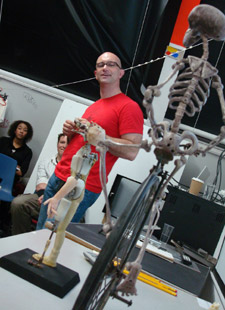 A Kingston University graduate has been pulling the strings, literally, in the smash hit children's movie Fantastic Mr Fox.  Andy Gent, who studied illustration and graphic design at Kingston University, brought Roald Dahl's wily Mr Fox to life on the big screen as head puppet maker in charge of a 25-strong team.

While cinema-goers have been sitting back with buckets of popcorn to watch as farmers Boggis, Bunce and Bean try to outwit the cunning creature in just under an hour and a half, what they haven't realised is that it took seven months to perfect even the first Mr Fox puppet. "In the end we created 17 different versions of Mr Fox and all of these had to be created in six different sizes.  With 18 assorted costumes to fit as well, the team really had its work cut out from the start," Mr Gent said.

By the end of production, directed by Wes Anderson, Gent's team had created a cast of some 535 puppets.  They saw to every minute detail as the characters took shape, from eyelashes to fingernails to tiny knitted jumpers.  "We even had to fashion tiny knitting needles so we could make the clothes fit our pint-sized characters - but that's the amount of detail you have to be prepared to work to at this level," Gent explained.

The movement of Fantastic Mr Fox and his cohort of woodland cronies was created using stop-motion animation.  Gent says the process is only now starting to be used to its full potential and is charming audiences worldwide.  "Some people say stop-motion is having a renaissance, but I say it never really had its peak.  We only now understand what it can do and that's why it's finding its feet," Gent explained.

Overseeing every aspect of the design and build process for the puppets on Fantastic Mr Fox, Gent has also constructed quite a career since his graduation.  "I left Kingston on the Friday and by the Monday morning I was starting work at Puppetoon Studios in London as a runner.  By the end of the week I was animating background characters," he said.  Several years on, and even though Gent has added the likes of Disney, Warner Brothers and Aardman Animations to his CV, he still looks back to his university days as some of the most important in his career.

"Kingston University gave me opportunities to not only develop my creative side, but to get out and meet the people who were shaping the animation field," Gent said.  "This industry-focused approach from the lecturers I had at Kingston was the singularly strongest asset of that course - they set me off in the right direction and I haven't looked back."

In a special lecture at Kingston University, Gent - who colleagues have nicknamed Gepetto after a character in Pinocchio - told the next generation of budding animators at the Faculty of Art, Design and Architecture how they should try to come to terms with the emotions of a subject.  "You have to observe and absorb the subtleties of life.  I'm a great people watcher and it's replicating that understanding of what makes things 'real' that counts.  No matter how surreal the character you are working on seems, it has to have aspects that the audience can recognise and connect with," Gent explained.

Often working 12-hour days up to six days a week, Gent dedicates years of his life to single projects.  Finally seeing the furtive Mr Fox on the big screen at the premiere in New York was an emotional experience for the Kingston alumnus.  "It's like seeing two years of your life fast forwarding before you on the screen.  All that hard work, passion and dedication right there before your eyes - it's quite an emotional moment," Gent said.

Principal lecturer Jake Abrams remembers how his former student showed great potential even in the early days of his degree.  "Andy came up with some outstanding ideas while he was studying at Kingston, showing great promise and, like a lot of our graduates, has gone on to make a big impression on the industry.  He's a true inspiration to our students about what they can achieve." 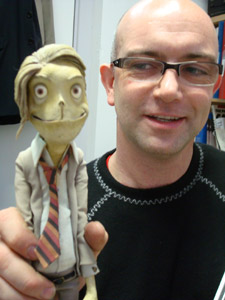 Gent's next big job will be working with film director Tim Burton on a stop-motion remake of the 1984 film Frankenweenie due to be released in 2011 and he has plenty of other projects in the pipeline too.  "Before I work on the film, I've got to make 75 shoes talk for a TV commercial and do a pop promo for Paolo Nutini.  I'm particularly excited about the prospect of working with Tim Burton again after the amazing experience I had working on The Corpse Bride," he said.

With an increasing number of films worldwide currently using the stop-motion technique, Gent says there aren't enough people in the field to work on the productions.  "We haven't been affected by the economic crisis and we're always looking for students to fill internships," he said.  "Students can find a lot of opportunities out there despite the recession."