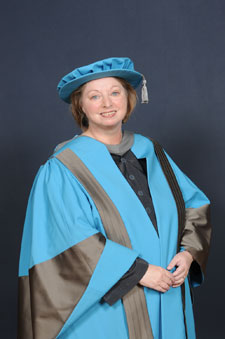 In a career that has spanned more than 20 years and produced some 13 works, writer Hilary Mantel has not only achieved international critical acclaim, but her bestselling work has attracted academic interest too.  Receiving an honorary degree from Kingston University at the Rose Theatre in Kingston, Ms Mantel said a determination to carry on, even without outside recognition, was as important as writing ability. "Inside you there is a world that only you can create. I hope my work and my story is inspiring to other writers, which is why I am delighted to accept this award," she said. "Talent counts, but sometimes stamina counts just as much; indeed you could say persistence is a facet of creativity."

From the court of King Henry VIII to the mill village in which she grew up, Ms Mantel's work encompasses historical fiction, personal memoir and literary critique.  Described recently on BBC Two's Culture Show as an 'intense, troubling and evocative' writer, Ms Mantel told film-maker James Runcie that she had spent her childhood seeking answers and exploring what was behind closed doors: "I was always listening hard and trying to work out what was happening in the next room," she said.

Born in Glossop, Derbyshire, Hilary Mantel studied law at university.  However, ill-health took over in her early twenties and it was this that forced her to take control and carve out a career as a writer instead: "My route to publication, to finding a readership, was neither swift not straightforward," she said. "What I want above all is for my experiences to offer encouragement to young writers and other artists. No one should panic that 'the book is dead'. The way stories are delivered may change, but we still need stories, shaped by the individual voice."

Dr David Rogers, head of Kingston's School of Humanities, said the University was delighted to honour one of the finest contemporary novelists, not only in the UK but in the world. "The remarkable range of Hilary Mantel's writing and her unique ability to bring history alive through her fiction provide inspiration for our developing writers at Kingston as does her persistence and good humour," he said.

When Wolf Hall, a novel about Thomas Cromwell, won the Man Booker prize in 2009, Mantel described the experience as 'the ultimate recognition', but also something an author needed to just 'get past' to 'become the writer that they meant to become all along'.  Selling more than 220,000 copies in hardback, it became the prize's fastest-selling winning book as well as the first to go straight to the no.1 spot in the general fiction chart when it was released as a paperback.

Ms Mantel said she had planned to write a novel about Cromwell since the 1970s, before she was a published author. "I was fascinated by his story - how did a Putney blacksmith's son become Henry VIII's right hand man?" she asked.

Cromwell, the man who presided over the dissolution of the monasteries and engineered Anne Boleyn's execution was a more complex character than the popular perception of him suggested, according to the author. "In popular fiction and drama he always appears as the villain. I wanted to interrogate the prejudice against him and revisit the evidence."

Ms Mantel, who became an Honorary Doctor of Letters yesterday is currently working on the sequel to Wolf Hall called The Mirror and the Light, and continues to write reviews and essays, mainly for the Guardian, the London Review of Books and the New York Review of Books.

Find out more about studying creative writing at Kingston University.