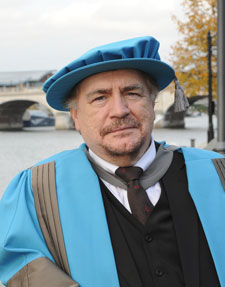 Hollywood star and one of Scotland's hardest-working actors Brian Cox has been named an Honorary Doctor of Letters by Kingston University in south west London. Best known for his roles in movies such as The Bourne Supremacy, Rise of the Planet of the Apes, Rushmore and X2: X-Men United, and his extensive work with the Royal Shakespeare Company, Mr Cox was honoured in recognition of his tireless work in drama education.

His career on stage and screen has spanned more than four decades. He was the first actor to play Hannibal Lecter on film in Manhunter in 1986, a performance that is remembered as a classic. An accomplished Shakespearean actor, his performance in the title role of the 'horror shocker' Titus Andronicus in 1987 won him best actor awards, and he played Agamemnon in Troy opposite Brad Pitt in 2004."It's a huge buzz for me to receive this honorary degree, especially as it's the first time I have received any kind of honour from an English university," Mr Cox said."I remember Kingston when it was a very successful polytechnic and I know it has a great tradition of quality education. Added to that, it's always great to get recognition from one of the newer institutions."

Beyond his performances Mr Cox has also been associated for many years with actor training, creating in the 1990s an innovative programme for British students to study at Moscow Arts Theatre School. He maintains a very keen interest in higher education and is currently Rector of Dundee University, having been elected by the students to this ancient position."In my Rectorial capacity, I am very interested in exactly how the humanities are taught. For instance, I believe contact time with tutors is really important and students must feel that they are part of a wider community," he said."We need to make the student experience more applicable to what I call the attention deficit society."

Born in Dundee in 1946, Mr Cox's mother worked as a spinner in the jute mills for which Dundee was at the time famous. After graduating from LAMDA, the London Academy of Music and Dramatic Art in the 1960s he returned north to start his professional stage career at Edinburgh's Royal Lyceum Theatre Company. Since then his career has taken him around the world and seen him appointed Commander of the Order of the British Empire (CBE) IN 2002.

Mr Cox now spends much of his time in the United States, but is returning to the UK this autumn to work on one of his passions, radio drama. "I love acting on the radio. The money isn't very good but you do it for its own sake. I carry the BBC I-player with me wherever I go and I am about to record the eighth series of Victorian detective stories featuring Inspector James McLevy for BBC Radio 4," he said.

Professor Ian Brown, from the School of Performance and Screen Studies, said Mr Cox has an admirable commitment to arts education. "In particular he has an ability to remain rooted in his own community while being such a world star. Brian has also shown great interest in the training of young actors and in youth theatre. He truly understands that the arts are part of our community," Professor Brown said.