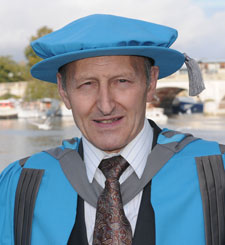 A leading scientist who has just been awarded an honorary doctorate from London's Kingston University says the only way to true success is through hard work and long hours.

"What would I say to students starting out on their academic life?" mused Professor Thomas Bolton, who was named a Doctor of Science in recognition of his achievements and outstanding contribution to the study of smooth muscle physiology in a ceremony at Kingston's Rose Theatre.  "I would say there are no short-cuts. Understand everything you do 100 per cent at each and every stage, be prepared to work long hours, be almost zealot-like in your approach, learn how to fight off bureaucrats - only then will you have the drive and knowledge to succeed."

He clearly knows what he is talking about, with the Kingston University award being simply the latest to recognise his often-pioneering work into understanding how smooth muscle cells - which measure barely half a millimetre at most and are found in things such as eyes, the intestine, the bladder and uterus - operate to keep the body's organs working.

Indeed, it is such research on which he has primarily concentrated since taking up a position at St George's, University of London Medical School in 1976, where he was made a professor in 1980. In 2005 a meeting of the Physiology Society was held in Oxford to celebrate the contributions of Professor Bolton to his field, while, in 2007 the society awarded him its prestigious Annual Review Prize. 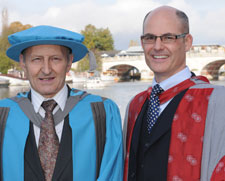 Professor Bolton's initial degree was a first class honours in Physiology from the University of London, which was followed with a PhD in Pharmacology from its School of Pharmacy. Subsequently completing his Bachelor of Veterinary Medicine in 1969, he was admitted to the Royal College of Veterinary Surgeons as a practising veterinary surgeon.

At 28, the young Tom Bolton decided he wanted to dedicate his working life to academic research and moved to the Department of Pharmacology at Oxford University - where he was able to throw himself into smooth muscle research working in a world-class laboratory headed by renowned scientist Edith Bülbring.

His distinguished career has taken him around the world, which he cites as one of the highs of his job, giving him the chance to meet like-minded researchers hungry to find that eureka moment. In contrast, he views the lows as the relatively poor pay considering the hours worked and the contribution such work makes to the medical world. Other memorable anecdotes include being examined for his PhD by the future Nobel-prize winner John Vane, probably one of the last century's most distinguished pharmacologists.

Dr Nick Freestone, principal lecturer at Kingston University's Faculty of Science, Engineering and Computing, praised Professor Bolton's many achievements, including a four-year stint as the then St George's Medical School's Dean of Research and Development, where its research income nearly doubled.

"Professor Bolton displays an intellectual curiosity which is hard to surpass and has been a good friend to Kingston University over the years, especially in terms of his generosity and willingness to help," Dr Freestone said. "His many achievements include being instrumental in setting up the Master of Pharmacy course  jointly run by Kingston University and top medical school St George's, University of London."