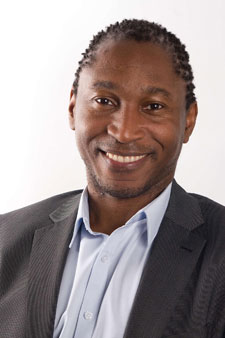 High-flying barrister Leslie Thomas, who graduated from Kingston Law School in 1988, had spent 21 years at the Bar before he took a career break and decided to invest in his first movie, becoming an executive producer of the critically-acclaimed blockbuster We Need to Talk About Kevin.

"I had been working so hard for all those years as a barrister," he said. "When I took my sabbatical my financial adviser suggested that I had time to learn about the film industry and that maybe I should invest in one. I arranged a meeting with a London-based film company called Piccadilly who gave me several scripts to read. When I read 'Kevin' I immediately realised the film would be a hit and it turns out it was one of the wisest investments I've ever made. Of course it was a huge learning process for me as I knew nothing about the movie business at the start, but I became very involved with production finance and had real input."

The movie, which stars Tilda Swinton, won the top prize at the London Film Festival, second prize at the Cannes Film Festival and is on general release now in the UK. The drama, adapted from a 2003 novel, takes a deep look into the relationship between a mother and child. The mother, played by Swinton, never connects emotionally to her child, Kevin. Later on, the child commits a school shooting that has the mother questioning how well she raised Kevin.

"I keep pinching myself and wondering when I am going to wake up," Thomas said. "I am just an ordinary boy from south-west London. I grew up in Battersea and did my law degree at Kingston University. Never in my wildest dreams would I have thought I would be involved in a film as big as this. It was also lovely to be able to share my joy with some of my former law lecturers at Kingston, such as Dr Penny Darbyshire."

Mr Thomas, a specialist in human rights, is already hugely in demand as a barrister at London's Garden Court Chambers, and his legal career is equally high profile. He was instructed on behalf of the family of Mark Duggan, the man whose death sparked the Tottenham riots and London-wide looting, at his inquest. Now, though, he is hoping to run a career as a movie executive in parallel to his work at the Bar. "I am already lined up to look at a load of scripts for next year," he said.

He believes that, as well as the gripping script, it was the lead actress' performance that made the movie. "I think that Tilda Swinton will be nominated for best actress at the BAFTAs," he said. "The film is released in the States on December 2. Of course, it could be close to home for many Americans because sadly high-school massacres seem to be much more common over there."

Dr Penny Darbyshire, Reader in Law at Kingston University, taught Leslie when he was an undergraduate at Kingston in the 1980s. "Leslie's astonishing success in his career at the Bar and now as a film-maker provides an inspiring example to Kingston students who, like him, come from less privileged backgrounds," she said. "As an undergraduate, he came to appreciate that achievement was directly proportional to the efforts he made and his background did not need to be a barrier to success. Leslie is exceptionally hard-working and is a dedicated self-improver - he's a model to us all."

Find out more about studying law at Kingston University.