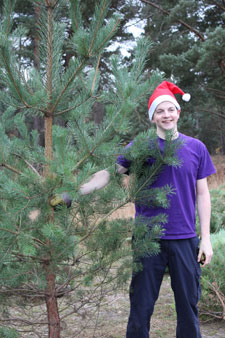 This year, instead of simply purchasing several trees to - quite literally - 'deck the halls with', a partnership was created with The Surrey Wildlife Trust to organise a Christmas Tree Cutting Event.

KUSCO, the University's facilities management company, wanted to work with the University to make Christmas a little more sustainable this year. "We discussed real versus artificial trees, and then threw this idea on the table," Jana Bentley, head of waste management at KUSCO, explained.

Donning work boots and wellies - along with a festive hat or two - staff and student volunteers pitched up with their tools and took a hands-on approach to sourcing Christmas trees for the University campuses. Taken from the Trust's Barossa site near Camberley, the Scots Pine trees that were in for the chop would have been felled regardless of the festive season as they were encroaching on an area of lowland heath which is a very important, but declining, habitat that the Trust is trying to protect.

"The Scots Pine trees were planted here after the second world war when Britain had used up most of its timber supplies and wanted the industry to become more sustainable rather than importing wood from overseas," Ranger James Herd explained. "The more established trees that you see on the site today were originally planted in rows to allow them to have space to grow so they could be used for their timber."

The seeds from the trees became dispersed causing them to grow randomly over the heathland, Mr Herd said. This meant that they didn't have room to grow big enough to be used for timber so left unmanaged the trees would eventually take over the habitat that the Trust is trying to protect. "Grazing animals on the site is another way of keeping the grass and scrub under control," he added. 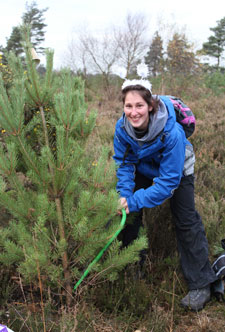 Run by Ranger James Herd and Events Officer Katy Gower, the tree-cutting event provides an exchange of resources between the Trust - which receives a donation as well as some manual labour for the day, helping staff to clear the trees and preserve the heath land habitat - and the University, which leave with some Christmas trees to distribute around its campuses.

Kingston Librarian, Phil Segall was keen to be a part of another of sustainable initiative as he is already involved in the Community Garden project at the University's Kingston Hill campus, where volunteers maintain and manage a garden in return for reaping the rewards of its vegetable produce.  "I received an email about the Christmas tree chop and thought I'd come along as I had a spare Monday morning," Mr Segall said. "It will be nice to have a tree in the library to make things a bit more festive and it was a great feeling to be part of the team of volunteers hoping to give the University a greener Christmas."

Third year student Derryn Lovett was also delighted to be involved. "I've taken part in various volunteer activities before, working for the Scouts and on environmentally-friendly projects," he said. "My degree in Geographical Information Systems does involve a lot of sitting in front of the computer so I find doing these things helps get me outside from time to time."

The event - which is a regular occurrence for the Trust but a first for the University - will also encourage a greener approach on campus way beyond the festive season as there are plans for the trees to be broken down and recycled around the University grounds once the celebrations are over.

With plans underway to take efforts one step further next year with recycled and home-made decorations to accompany the sustainably-sourced trees, the University was slowly moving towards a more environmentally-friendly Christmas, Jana Bentley explained. "In the future the only thing that won't be green is the snow!" She said. 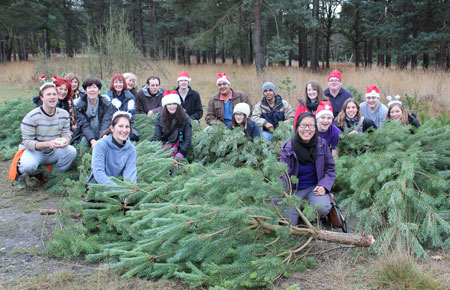 Find out more about The Surrey Wildlife Trust and their work.