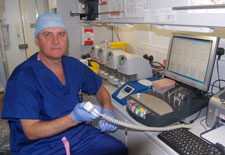 Technology introduced by a Kingston University biomedical science graduate is helping identify patients for whom traditional anti-clotting medicine would be ineffective and potentially life-threatening.

Alan Rayner, chief clinical perfusion scientist at London Bridge Hospital and Wellington Hospital, explored the use of genetic testing alongside blood platelet function screening for his hospital-based dissertation.  The study, completed this year as part of his Kingston University MSc in Biomedical Science, focused on the role of genetics in the successful use of medicines used during common life-saving cardiac procedures.

Mr Rayner's specialist work as a perfusion scientist involves operating a heart-lung machine during cardiac surgery.  "My job is to maintain life support during cardiac surgery and monitor the blood when on bypass, using medicines to make sure the natural clotting mechanisms are suppressed," he explained.  This process must be reversed to make sure the blood can clot again when the operation is complete. "So taking the technology we use in surgery and applying it to cardiology patients undergoing angioplasty and stent procedures, the hospital is able to identify, in as little as an hour, those patients for whom these post-surgical medicines would be least effective."

Mr Rayner says the drugs most commonly prescribed to lessen the chances of blood clots during and after cardiology procedures, aspirin and clopidogrel, are not regularly monitored in the United Kingdom unlike other blood-thinning treatments such as warfarin.  "People who don't respond to clopidogrel are three to five times more likely to die from a stroke or heart attack within one year following stent placement," Mr Rayner explained.

His project, combining genetic tests alongside blood tests, sought to reduce that risk by identifying vulnerable patients.  "A significant number of people have mutations in the gene that produces the protein that converts the anti-clotting medicine clopidogrel into an active form," he said.  "The project I completed as part of my postgraduate studies at Kingston University allowed our team at London Bridge Hospital to become the first in the country to offer genetic and platelet function testing straight away at the bedside.  Instead of waiting up to two weeks for vital test results, we can have the information cardiologists and surgeons need to make a decision on the drug to administer in under an hour."

Mr Rayner said the Kingston University course was ideal because it was tied in directly with the extension in services his team had planned.  "The course was an obvious choice because it offered a near perfect combination of subjects pertinent to our programme," he said. His employer, Hospital Corporation of America (HCA), is the largest provider of private healthcare in London and the 43 year old said it was a tough balancing act to manage two cardiac units and his studies at the same time.  "The majority of students on the course are biomedical students, but this didn't stop me from seeing the benefit of stepping outside my specialist field to understand more about an area that supports my everyday work in theatre," Mr Rayner said.

Senior lecturer in haematology and immunology, Dr Karen Whiting, from Kingston University's School of Life Sciences, said Mr Rayner's part-time route through a postgraduate course demonstrated the way professionals could enhance their careers with study.  "Alan's project was an excellent example of how the course allows students to link academic knowledge to the practical applications of biomedical science," she said.  "By taking a part-time route, he was able to combine his work and study and the result will be an enormous benefit to cardiac patients."

Mr Rayner's Kingston project was part of a wider programme of screening that won his team at London Bridge Hospital the best medical practice trophy at the recent Independent Healthcare Awards presented at London's Marriott Grosvenor Square Hotel.  "Winning the award has highlighted the work we have been doing.  We believe we are the only centre in the United Kingdom, private or NHS, to have adopted this approach to anti-platelet therapy monitoring alongside genetic screening," he said.  "It is ideally suited to being rolled out across the private and NHS sector - saving time, money and, most importantly, lives."