Student on track for an Indian design odyssey 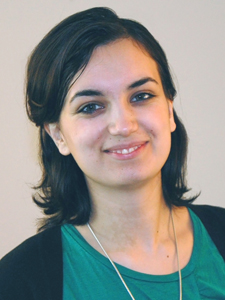 A Kingston University student has secured a place on a train journey that will travel the length and breadth of India to look at new design projects.

Karishma Rafferty will join 450 other young people for the trip that will last 15 days and cover 6,000 miles. The 25 year old, who is currently studying on Kingston's Curating Contemporary Design MA course, will join the Jagriti Yatra ('awakening journey' in Hindi) as it visits cities all over India.

The locomotive leaves Mumbai on Christmas Eve, returning more than two weeks later having travelled as far north as Delhi and to Madurai near the country's southern tip.

Karishma's Kingston University course director, Professor Catherine McDermott, suggested she apply for the trip. "Karishma won a place, which is fully-funded by the British Council, in the face of fierce competition. I am very much looking forward to her account of the journey," she said.

Karishma, who was also an undergraduate at Kingston graduating with a First Class degree in graphic design in 2007, secured her place thanks to a curriculum vitae that includes stints working for publisher Phaidon Press, the Royal Society of Arts and for internationally-renowned design agency Pentagram in Berlin.

The aim of the journey is to encourage a spirit of entrepreneurship among Indian youngsters and turn "job seekers into job creators". Most of the passengers will be aged 20-25 and earning less than 120 rupees (about £1.50) a day. They will be accompanied by a select few foreign students with an interest in India's development and experienced design professionals who will be giving talks. At each stop, the passengers will visit people who are already working on solutions to their country's development and youth unemployment problems. 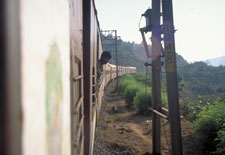 Karishma is anticipating an inspiring journey. "I think it'll be intense," she said. "Those 15 days on the train are going to be packed with fascinating speakers, visits and discussions. I want to document as much of it as possible for the students and staff back at Kingston University."

She is hoping to build close friendships with other participants on the trip with whom she will be able to collaborate in the future. "I feel confident that this experience is going to be a huge boost to my career as a designer and curator," she said.

Although Karishma's mother's family is from India, this will be her first visit to the sub-continent. Her grandparents were born in Sindh province, which, after the partition of India in 1948, became part of Pakistan. They emigrated, eventually settling in Spain.

"From a personal, cultural perspective this is a really important opportunity ," she said. "My mum is overjoyed for me as well. She hasn't been to India since she was a child."

During her first stint at Kingston University, Karishma was part of a team which won a Royal Society of Arts Design Directions award. "Karishma always demonstrates an imaginative understanding of problems," senior lecturer in graphic design, Marion Morrison, who taught Karishma at the time, said. "Karishma sees experimental design potential in everything she comes into contact with. She's bound to inspire people she meets on the way and to work selflessly to contribute to any team situation."

Kingston University's MA in Curating Contemporary Design is run in conjunction with the Design Museum. The course has partnerships with institutions in London and throughout the world. As part of the course, Karishma is also set to visit the China Academy of Art in Hangzhou during the spring. "It'll be interesting to compare the design worlds in China and India," she said. "India's is younger than China's - but there's a real buzz about it. The Indian people have such amazing skills so there's a lot of potential there."

Karishma will be blogging about the journey at www.designyatri.wordpress.com.