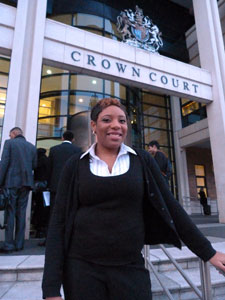 As the defence barrister's line of questioning becomes increasingly aggressive, the young forensics expert on the stand nervously looks down at their notes and then to the jury. Temporarily lost for words, they know they can't let this attack affect their performance. They are, after all, only presenting their findings.

You could be mistaken for thinking this is a scene from an imported police procedures series such as CSI, NCIS or Dexter. But the person in the dock isn't a hot shot US forensics specialist with a personal investment in the case - they're a student from London's Kingston University getting unique experience as part of their degree.

Senior lecturer Dr Sarah Gardner, a former forensic scientist with eight years experience in the field, has taught on Kingston's  forensic science and investigative analysis and forensic biology degrees for the past four years. This particular assessment accounts for 25 per cent of the students' total overall mark in the advanced forensic laboratory techniques module so there's a lot riding on their day in court.

"They have to assess six mock cases, including stabbings, rapes and murders," Dr Gardner explains. "Five students work on each case, examining key items in a laboratory for hair, fibres, glass, blood, semen and saliva and blood pattern analysis, which they write up into a witness statement and then have to defend in court."

Because of the University's good relationship and close proximity to the crown court, Kingston students get the opportunity to be assessed in an authentic legal environment. Kingston Crown Court has a history of hosting high-profile cases and is an imposing space for the students to make their debut. The barristers, all from Kingston University's Law School, pull no punches during the cross examination. However, the forensics students have been well prepared. 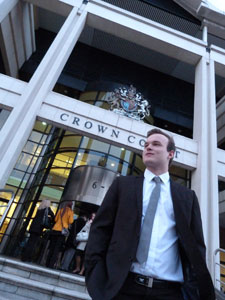 "We were told they would focus on us rather than the findings," says 21-year-old Dale Moy, a third year student originally from Barnet, North London. "It's a lot easier to attack an individual than it is to attack science. But it's tricky - we need to remain impartial which can be hard. We can't use certain words so we're trained to explain things in a way that doesn't lead the jury."

"For example, we can't say 'That is his blood', we have to say 'It matches'," explains fellow student Carina Pellius, also 21 and originally from Stratford, East London. This can lead to tense scenes in the courtroom and puts the forensic students under great pressure. "Many of them haven't taken the stand before, so they're bound to be nervous," Dr Gardner says.

Nervous they may be but Mr Moy and Ms Pellius know how important this experience will be when it comes to finding a job after graduation. "We do all the laboratory testing ourselves and we're left alone to assess which pieces of evidence have more significant value for the case," Mr Moy says.

Ms Pellius agrees. "This level of independence is important because we'll already have hands-on experience. We'll know what we're doing and won't have to rely on somebody else."

Being assessed in the real-life environment of a crown court isn't the only benefit to studying forensics at Kingston. "The lecturers have actually been in the field," says Ms Pellius, "So they bring their experience to bear on our learning. It's good to have them teach us as they already know what's in store."

"The course does relate to a lot of real life issues," adds Mr Moy, "Plus the lecturers show us how it actually is."  And how does real life forensics compare to what we see on our TV screens? "None of the programmes really show what it's like," says Mr Moy, "Although Bones is probably the most realistic."

"Dexter annoys me and I didn't watch CSI until after I started the course," says Ms Pellius. "And when I did it just made me angry. It's nothing like real life at all."