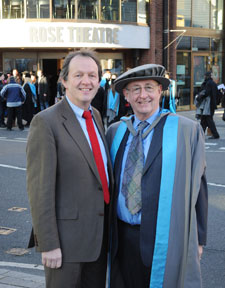 Frank Whately, who created Kingston's industry-respected drama degree course, has been made the first ever Honorary Fellow of the University in recognition of his lifelong commitment to drama education. The course has been the launch pad for many young actors including Disney's Chronicles of Narnia star Ben Barnes.

Mr Whately was appointed by the Faculty of Arts and Social Sciences to start a new drama degree in 2000, and the first intake of students started a year later. Soon after, he began work on creating postgraduate courses in classical theatre with Sir Peter Hall. Four years later, he became the first head of the School of Performance and Screen Studies, adding dance to the School's portfolio. He retired in 2009, but continues to teach.

"A couple of months ago one Sunday evening, one of the professors Ian Brown sounded me out about becoming an Honorary Fellow and I was just totally taken aback," Mr Whately said. "I'm very honoured and surprised because I always think it's the University and the students who are the real stars of the show."

Mr Whately's commitment to drama as a subject and to young people in general has been evident throughout his working life. He was closely involved in the creation of the National Youth Music Theatre (NYMT) in 1985, which was to become a breeding ground for a generation of talent, including Jude Law and Matt Lucas. Mr Whately wrote and directed The Ragged Child for the NYMT, which tells the story of Lord Shaftesbury's involvement with children's rights and the ragged school movement. He wrote the lead part for his former student Jonny Lee Miller, who took his first screen role in the BBC adaptation of the play. 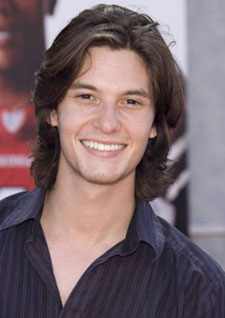 "As a long-time educationalist, I love watching young people fulfil their promise," Mr Whately said. "That's what they've done in huge measure at Kingston University. People have gone into acting and directing but also into teaching and business. We have had very successful actors such as Chronicles of Narnia star Ben Barnes, who came to Kingston as one of the first drama students. He achieved our first ever first class honours. Actresses such as Sheridan Smith and Amy Nuttall also started off in some of my productions."

Kingston's Rose Theatre has also played a key role in Mr Whately's life, as indeed he has in shaping the life of the theatre. In 1982 he launched an Arts for Kingston campaign with a former student, and after campaigning successfully for a major theatre, became a director of the resulting Kingston Theatre Trust.

Drama runs in the family. Mr Whately's brother is the actor Kevin Whately, best known for his portrayal of the much-loved Inspector Lewis in the television series based on Colin Dexter's characters. "I am often approached by young actors who have been taught or directed by Frank, singing his praises," Kevin said. "It makes me very proud, so I am delighted that the University has also recognised his many fine achievements so far by honouring him with a Fellowship."

Dr Trish Reid, the Deputy Head of the School of Performance and Screen Studies, said Frank Whately was a unique figure. "I can't recall anyone in academic life who has been so uniformly loved and respected as Frank," she said. "He always seems to bring out the best in staff as well as students. You can't go anywhere in Kingston with Frank without bumping into people who know him, were taught by him as students or know of his tireless work in establishing the Rose Theatre."

Mr Whately continues to direct productions and is currently writing a book about the Rose Theatre. 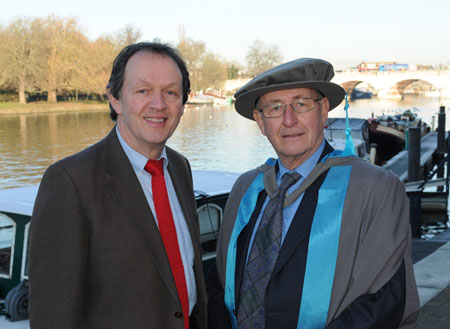