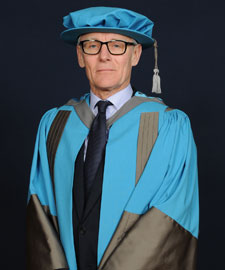 The intellectual rigour of research, debate and personal challenge provided by a university degree is a proven method of preparing for both business and life challenges, according to the former chief executive of BSkyB Tony Ball. Mr Ball was speaking at a graduation ceremony on January 18 where he accepted an honorary degree from Kingston University.

Now Chairman of Germany's largest cable television network Kabel Deutschland, he received his Doctor of Letters award from the University's Faculty of Business and Law at the Rose Theatre in Kingston. Mr Ball, who already holds a Masters of Business Administration (MBA) from Kingston Business School, said he was delighted to return for the ceremony. "To be recognised as making a contribution in the world of business is at the very least flattering," he said.  "To receive that recognition from an institution such as Kingston University with its outstanding and highly-respected Faculty of Business and Law is pretty amazing."

Having left school at sixteen, Mr Ball initially turned his back on traditional education to take a job as an outside broadcast engineer with Thames Television before joining British Satellite Broadcasting which was later taken over by Sky. Describing his route to higher education as an 'erratic path', he told the audience of gathered graduates, family and friends that his experiences had left him with a tremendous respect for the value of formal learning and qualifications. 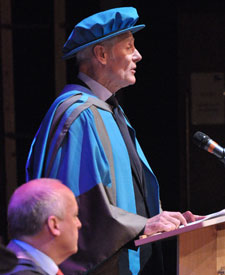 "Taking time out for learning at any stage is precious so I would encourage young people with access to the great resources of Kingston Business School to make the most of their experience here," he said. "The degrees you are awarded today are hard won and of the highest calibre. They are going to be incredibly important in this ever more competitive world."

In 1993, Mr Ball became BSkyB Sports Head of Productions and Operations and General Manager, Broadcasting.  He then spent a number of years working in the USA, where he was the Chief Executive of the News Corporation/Liberty Media joint venture, FOX-LIBERTY Networks, which included FX Networks. It wasn't till 1995, however, that Mr Ball decided to - in his words - 'get back on the education horse' and study for an MBA at Kingston University.

Mr Ball was appointed as Chief Executive of BSkyB in 1999, a position which he held until 2003.  During this time he led the company to its strongest period of growth in its history, returning the company to profitability while doubling the number of subscribers and converting the entire base to digital.

"We are very privileged to count Tony Ball among our MBA alumni," Dean of Kingston University's Faculty of Business and Law, Professor Jean-Noël Ezingeard, said. "He works in an industry where it's impossible to stand still and his stellar career is an inspiration to all our students."

Tony Ball is also working for BT Group plc and as a board member of the Olympic Delivery Authority for the London 2012 Olympic Games.