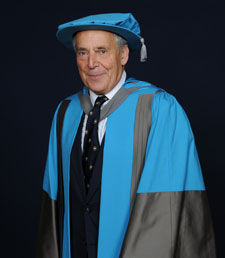 Human rights should not be regarded as a term of abuse and the European Court of Human Rights has led to valuable reforms and raised standards across Europe, according to leading lawyer and academic Sir Francis Jacobs.  He was speaking at a graduation ceremony where he accepted an Honorary Doctor of Laws from Kingston University for his outstanding contribution to European Union Law.

"Why the current furore over human rights, which has almost made the term one of political abuse?" Sir Francis asked.  "That should be unthinkable, especially in countries which have a remarkable record of protecting liberties."

He added that the solution to many of the problems in Britain - trade, business, environment and energy - required European solutions.  "Sometimes the European solution may seem the wrong one," he said.  "But even the eurozone crisis, very serious as it is, is a temporary phenomenon.  In the long run, the destiny of this country lies in Europe, with which we have much in common.  And from which we may even have something to learn, since we currently seem to come bottom in almost every social and political league table in Europe, except football."

Sir Francis's legal career spans four decades.  At the Council of Europe in Strasbourg, he worked in the European Commission of Human Rights.  He then worked in Luxembourg at the European Court of Justice (ECJ), starting just before British entry to the EEC.  In 1974 he was appointed to the newly created Chair of European Law in the University of London.  He then served as an Advocate General at the ECJ from 1988 to 2006, when he joined King's College London as Professor of Law.

"I am thrilled to be involved with Kingston University as it's always had a very good law school," Sir Francis said.  "Even in the very early days when it was still a polytechnic, it was regarded as one of the best law schools and it's clear to me that the staff and students are still highly motivated to this day." 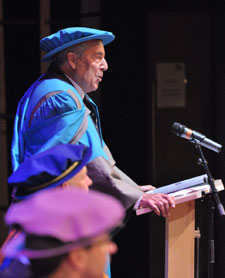 Sir Francis has several links with Kingston.  He has lived for many years nearby:  first in Ham, then (and now) in Teddington.  When Advocate General at the ECJ, he had the pleasure of receiving groups of students from Kingston Law School at the Court.  He is patron of the Kingston Chamber Orchestra, in which two of his daughters play.  His son-in-law is also a Kingston graduate.

"Sir Francis has been one of the key architects of European law down the years," Matthew Humphreys, Head of Kingston University's Law School, said.  "We wanted to recognise his unparalleled contribution to EU law in both the courtroom and the lecture theatre and his strong links to us here at Kingston."

Sir Francis is currently involved with numerous organisations:  he is president of Missing Children Europe (the European Federation for Missing and Sexually Exploited Children), and of the newly founded European Law Institute in Vienna.  Sir Francis was appointed to the Privy Council in 2005 and knighted in 2006.