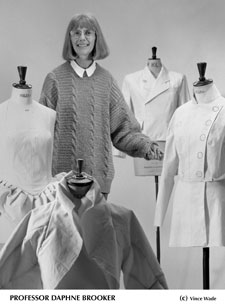 Professor Daphne Brooker, head of Kingston University's School of Fashion for three decades, has died after a long illness aged 84.

Daphne joined what was then Kingston College of Art in 1962, saw the institution become a polytechnic in the 1970s and retired in 1992, the year Kingston became a university.

Daphne Brooker was born Daphne Beacon in south London in 1927. The family moved to Kingston when she was five years old and would have been able to watch construction of the new art school building at Knights Park between 1937 and '39. Daphne herself attended Kingston School of Art as a teenager and then, in 1946, went on to the Royal College of Arts. There she met and married the artist Max Brooker.  During 1952 she was a finalist in Vogue Magazine's Model Contest and posed for some of the most eminent fashion photographers of the day including Anthony Denny, Norman Parkinson and Cecil Beaton.

Daphne didn't enjoy modelling - "it wasn't for her, she said she got bored," her grand-daughter Elizabeth Roche said. She turned to theatre and she worked in the wardrobe department at the Players Theatre and of the fledgling Glyndebourne opera company, where she met her lifelong friend, the costume designer Rosemary Vercoe. She moved into education and taught at Walthamstow School of Art in east London where her students included fashion designers Marion Foale and Sally Tuffin as well as the film-director Ken Russell and pop star Ian Dury. In 1956, her daughter Caroline was born and the Brookers bought a house in Canonbury in north London, where Daphne lived for the rest of her life.

She arrived at Kingston in 1962 at a pivotal moment in post war fashion history - just as the sixties were beginning to swing - and established a reputation as someone who would drive her students to maximise their potential.

Between 1970 and 1974, Kingston students won the Design and Live international student fashion competition in Switzerland for an unprecedented four years in a row - at which point they were barred from entering. The Guardian remarked on how successful Kingston students were at securing jobs at the best design houses and boutiques, including Issye Miyake and Paul Smith, as well as high street stores including M&S and Wallis.  In 1983 they pulled off another hat-trick, winning the Munich-based International Sportswear competition for a third year in a row.

Daphne was a great believer in involving industry and private sponsorship in education.  She forged relationships with many corporations including Monsanto, M&S and Swiss and Italian textile manufacturers. The materials cupboard at Kingston was always well-stocked with high quality textiles while the manufacturers had their fabrics promoted by up-and-coming designers. She persuaded Gordon Richardson, then the design director of Sabre International to join the teaching staff - Richardson today heads Topman's design department.

She also decided to take the graduate fashion show out of Kingston for the first time and started looking for suitable venues in central London. Shows were held at the National Portrait Gallery, the Royal Academy and Goldsmiths Hall, attracting sell-out crowds.

"Daphne was excellent and, for all the fear she put into her students, she managed to get industry to become involved with them," Helen Storey told the Times Educational Supplement. "She pioneered that, really. She not only made the course viable but gave students the best chance of being employed at the end of it."

Nadia Jones has similar recollections. "From day one they were very clear on how hard you had to work and how competitive the industry is. We did lots of industry-based projects and got real feedback," she said in an interview with the fashion bible Drapers.

Until the 1980s, Kingston had no professors of its own - although students were sometimes taught by visiting academics with the title.  In 1981, Daphne became one of the first three professors appointed by the then-polytechnic. Daphne also appeared on a number of influential government advisory panels relating to design education during the 1980's and was a member of the Royal Society of Arts.

In 1992, Daphne invited Ian Griffiths, a young designer working for MaxMara to do some part-time teaching. Within ten days, she managed to persuade him to succeed her as course director.

"She set the standard for fashion education," he said. "When she started, only Kingston, St Martins and the Royal College were doing fashion. She ran it like the iron lady of fashion - she did everything she could to benefit the industry, and her students. She wasn't frightened of anything."

Among the many tributes paid on her retirement, came one from the textile manufacturer and government design adviser Louis Van Praagg, who had got to know Daphne through their work on the body that awarded polytechnic degrees. Speaking to Drapers, he described her as one of his most influential colleagues "injecting her philosophy, experience and enthusiasm and bringing in ideas from other courses".

In retirement she took up painting. "Her home is full of her watercolours - there must be more than 200 of them," Elizabeth Roche said.

"Daphne was ahead of her time," Elinor Renfrew, Kingston's current academic director of fashion, said. "Although I didn't have the pleasure of working for Daphne, she really established the blueprint for the way design subjects are taught today. She was one of the first to get professionals from the fashion industry to come into the college - and that's something Kingston is renowned for today."