Students pair up with designer Daniel Eatock for One + One exhibition 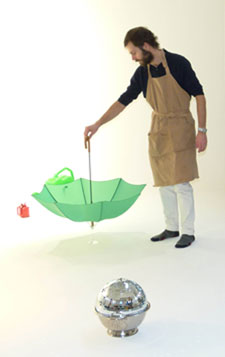 Daniel Eatock's new exhibition, One + One, which is showing at Kingston University's Stanley Picker Gallery, pairs up sets of objects that might not normally be seen together, including a watermelon wearing a swimming cap, an umbrella balancing in a cocktail glass and a basketball sitting in a fishbowl.

"The idea stemmed from a project I'm working on for the BBC," Eatock, who is best-known for designing different versions of the giant Big Brother eye for Channel 4, explained. "We're rebranding BBC 2 - giving it a new look that doesn't include the digit two. But the idea's grown from there - none of the works you see in the Stanley Picker Gallery are likely to end up appearing on television.

"We had to be very precise about the objects we used," he added. "We couldn't use any old watermelon, for example. If we were going to put a swimming cap on it, we had to find one that was roughly the same size as a human head. I went round so many different fruit and veg stores looking for one - and finally found it in a shop miles away from my flat and had to carry it home." 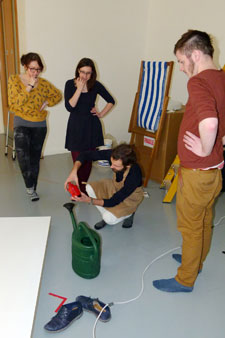 One of the students was assigned the role of tracking down some of the objects needed for the exhibition. "We compiled a list of everything we needed and their specifics," Nicola Brown explained. "Daniel used this as a shopping list, while I tried to contact anyone who could help us hire the more expensive items."

Eatock has been working on One + One while holding a design fellowship at the gallery, next to the University's Knights Park campus in south west London. "The students played a big role in this exhibition," he said. "We had a meeting every fortnight and, really, everything was up for discussion - from what objects we'd use and how they'd be displayed to how many items would be in the gallery at any one time. They really were equal protagonists in the whole process."

One + One runs until the end of March at the Stanley Picker Gallery, which is off Portland Road in Kingston upon Thames. The content of the exhibition will continually change as different objects are incorporated and re-used during the run.

"It's been a great opportunity to work with an established artist and get an insight into the process of setting up an exhibition from day one," 23-year-old Helen McCathie said. "It'll be useful experience when considering applying for internships or postgraduate study in the future."

Nicola Brown said working on the project helped with her dissertation which is looking at what objects mean or represent. "I will always make sure to follow his work from now on," she said. "It involves such a playful, childlike, innocent way of thinking which I think everyone needs to hold on to." 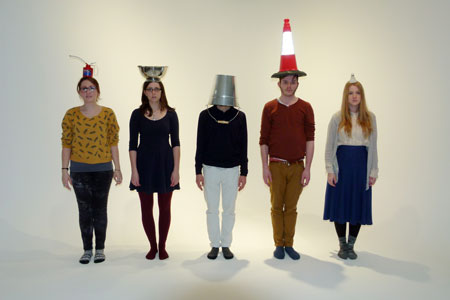