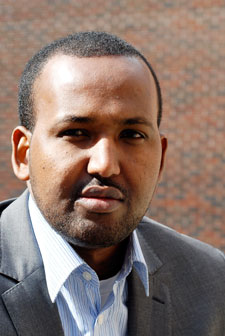 Jamal Osman beat off stiff competition from BBC film FIFA's Dirty Secret and another made for Al-Jazeera English to scoop the independent film-makers' prize for his moving 10-minute documentary Somali Olympic Dreams at the awards ceremony.

To make the short documentary the 32-year-old travelled to Mogadishu for Channel 4 News to meet the athletes who run daily through the city's "road of death".

"I am happy for everyone who was involved in the making of the story," Jamal said.  "But it was more about these inspirational athletes who want to do something positive."

Running after the athletes with his camera made the assignment particularly risky for Jamal, who could have been shot at any time by rebel gunmen or nervous security forces.  "It was challenging and dangerous but these guys were really determined to achieve something," he said.  "They are doing their best to train hard and they want to make their people proud.  If you ask them where their friends are, they will say they have either died or are members of militia groups.  In a sense they are unique because they have chosen not to take up guns and do the right thing. They don't have to win a gold medal - just making it to London will be an amazing achievement."

The RTS judges praised the film as a "remarkable project" which was "heart-warming, uplifting and heartbreaking by turn".

Somalia-born Jamal was unable to speak English when he arrived in the United Kingdom in 1999.  After being granted asylum, he decided to go back to education, working as a minicab driver at weekends to fund his studies, which provided a perfect source of stories and at the same time helped him improve his English.

He now works as a successful freelance film-maker and appears to have a bright future ahead of him.  "Even with the cutbacks across the industry, I haven't struggled at all and I haven't been out of work since I left Kingston University - firstly because of the good education I received there but also because of my background. I pitch as many stories as I can and I have a strategy and determination to do well," he added.

Jamal, who now lives in Battersea, graduated from Kingston in 2009, when he won the News Story Prize of the Year at the 2009 Foreign Press Association Awards, for his exposé of the theft of UN food aid.

Find out more about studying journalism at Kingston University.