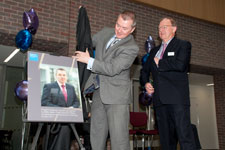 Growth opportunities in the United Kingdom are slowing down and investment is going elsewhere because of "misguided and misplaced" government policy, the head of British Airways' parent company has said in a speech to mark the opening of Kingston University's new Business School.

The United Kingdom was known as an entrepreneurial economy but the steps being taken by the Government were undermining that reputation, Willie Walsh, chief executive of International Airlines Group (IAG), said.

"Without question, investment is going to other parts of the world. I meet business people who are telling me that," he explained. "They're locating in places like Frankfurt instead of London. They would prefer to be here in London, but they're saying the environment isn't conducive to investment so we've got to recognise this as a key economic issue. Government policy is misguided and misplaced and needs to be urgently reviewed or, 10 years from now, we're going to look back and say how did we lose all that?" 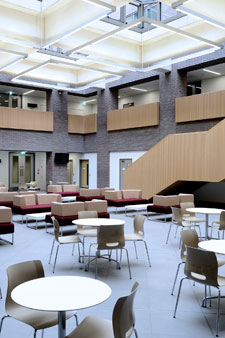 As well as criticising the air passenger duty airport departure tax, Mr Walsh said issues around the cost of visas and immigration delays at Heathrow airport were putting major investors off. "I had dinner recently with a businessman who controls a $70 billion investment fund and he stood for more than two hours in a queue to get into Heathrow, and said to me "I am not investing in this country if that's what I am going to face every time I come here"."

"The United Kingdom was ranked number 10 in terms of our economic competitiveness, but was it really our ambition to be 10th in the world?" he asked. "We're slipping down the rankings and these are jobs and opportunities lost."

The building contains a variety of modern teaching rooms, break-out spaces for staff and students to learn together, and many sustainable features. Adorned with dozens of flat screens and scattered with sofas, the atrium boasts a glass roof, making it feel bright and airy.

"I was here three years ago when this was all just a building site," Mr Walsh said. "Now I see that this is a fantastic facility of which Kingston University can be proud. I know it is going to be a great success and I look forward to coming back here on many occasions in the future." 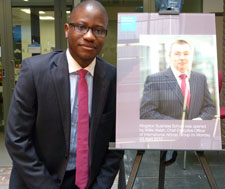 Business and human geography student Khotso Marumo, 22, was among those who had a chance to talk to Mr Walsh at the opening reception. "This new building is going to be a fantastic space where the business leaders of the future can learn," he said. "When I heard that Willie Walsh would be here I jumped at the chance to come along as I'm very interested in aviation as a career. He was very generous in giving me several minutes of his time for a personal chat."

Dean of the Faculty of Business and Law Professor Jean-Noel Ezingeard said the state-of-the-art complex would enhance Kingston Business School's growing reputation. "This great building will provide world class facilities to match the School's programme innovation and research excellence," he said. "Kingston thrives on diversity and has students from a variety of backgrounds and disciplines mixing with each other. Looking ahead, this building will be a springboard for even greater things."

The building also has strong environmental credentials. It has achieved a BREEAM (Building Research Establishment Environmental Assessment Method) rating of excellent. Designed and constructed with sustainability in mind, it uses renewable energy sources and is built and serviced in a way that respects the environment.