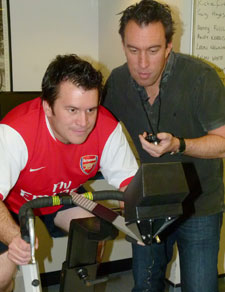 An exercise physiology laboratory is probably the last place you would expect to find the crew from an award-winning national breakfast radio show, but not top radio presenters Christian O'Connell and co-host Richie Firth. The duo, whose voices are beamed into homes across the country every weekday morning, have just found themselves back in the classroom getting some exercise education at London's Kingston University with a team of Absolute Radio listeners.

The pair were put through their paces by Kingston sports science expert Dr Chris Easton as part of the gruelling training for a football match which will pit Richie's old school team against some of Christian's most ardent fans. Before the players could lace up their boots to take on the challenge, they needed to make sure they were all physically up to the job, so they called on Dr Easton's expertise to make sure they were match fit.

"At Kingston University's Human Performance Laboratory we are able to monitor factors in individuals both at rest and during exercise which together can give a good indication of an individual's overall fitness," Dr Easton explained. For starters, Dr Easton's team of technicians and student volunteers began by taking some basic measurements from each player, recording their heights, weight and blood pressure. Next the players moved on to more physical tests, cycling on static bikes in the laboratory at a moderate intensity for six minutes. During this short exercise, a belt fitted around their waists monitored their heart rates, with the readings being recorded at five and six minutes. 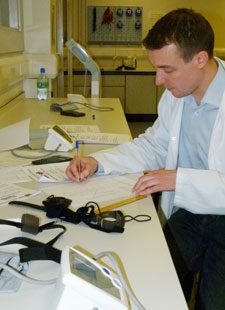 "We can get an idea of how the players might perform on the pitch without needing to test them over a long period of time," Dr Easton explained.  "Performing a sub-maximal fitness test such as this on the football players provides an estimation of maximum oxygen uptake without the risks associated with high intensity exercise."

The idea for Absolute Radio's football pitch showdown, entitled One Last Game, came about after Richie was tagged in a photograph on Facebook. The picture showed him as an 11 year old with his cup-winning school football team from 1988 and became a talking point on the show, inspiring the presenters to try to reunite the team. "I've managed to track down most of the players from the original photograph," Richie said. "It's taken a very long time though and people are all over the place now, so I have even had to enlist the help of a private investigator to round them all up."

Christian, meanwhile, put the call out to his breakfast show listeners asking for some willing opponents to step up to the challenge and take on Richie's team. In a case of survival of the fittest, all will be revealed when millions of listeners tune in as the teams finally go head-to-head on the pitch. The match will be hosted at The Valley Stadium in south east London, home to Charlton Athletic.

Gearing up for their showdown on the pitch, there was already an air of competitiveness in the Kingston University laboratory as the results came in. "I think I've done all right in the fitness test," Richie said. "Medically, probably not great but, comparatively, I've stacked up quite well. I've definitely surprised myself."

Despite Dr Easton and his Kingston colleagues actually rating Richie's results as poor, the soon-to-be goalkeeper was quick to point out that his performance was by no means the worst. "Only four people in the room were fitter than I am," he said. "And I'm the one playing in goal."

In light of Richie's performance, Christian was keen to stress his confidence in his own team, who have been affectionately dubbed 'OCFC' or O'Connell Football Club. "These men may not be the youngest, they may not be the fittest but they are great people and I know they are going to do themselves proud.

"Dr Easton and his team have certainly put the players through their paces," he added. "It's great to have had access to such excellent facilities at Kingston University to check our condition out. Hopefully by putting the team through the fitness tests in the lab environment, they'll realise just how seriously Richie and I are taking this." 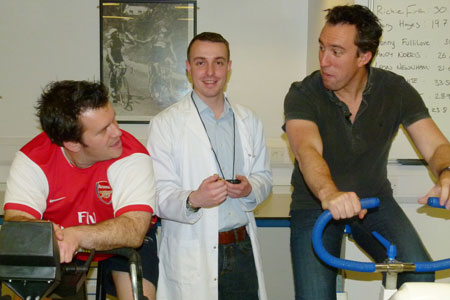