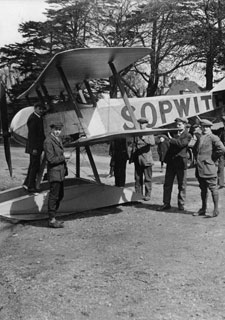 A history project led by a former member of Kingston University's engineering staff is set to capture the memories of the workers who built, checked and tested the aircraft without which the Battle of Britain could not have been won.

It is 100 years since the first aircraft factory founded by aviation pioneer Tommy Sopwith was set up in Kingston. It produced legendary aircraft including the most successful Allied fighters in both World Wars - the Sopwith Camel and Hawker Hurricane.  While a special centenary festival in June explored the company's crucial role in this turbulent time in history, Bill Downey - a retired University information specialist - is heading up an oral history project to make sure the memories of people who worked on the legendary aircraft are captured for future generations.

"The Hawker factory was the largest employer in the borough for much of the last century and generations of the same families worked there. That all changed during both World Wars when women had to step in and fulfil those roles traditionally held by men," Mr Downey, who has co-ordinated a team of volunteers carrying out the interviews, said. "One of the important reasons for this centenary celebration is to recognise the role of those workers, particularly the women, who were conscripted to work on the factory floor. We're not looking for just light and fluffy memories in these interviews - we want to capture the real perspectives of the people we know worked incredibly hard and often in difficult conditions."

Kingston University history expert Dr Sue Hawkins has been an adviser on the project and agrees that it is an important medium of recording memories of days gone by. "It gives people the chance to tell their stories from their own point of view and it is often people who wouldn't usually have been asked," she explained. "Heroic stories of Spitfires and Hurricanes have understandably been a huge focus for history, but this project is designed to unlock the stories of those people who can give us a day-to-day insight into the period between the two World Wars. Their jobs and views at the time would have perhaps seemed very mundane but, so many years later, they are experiences totally removed from our current understanding," Dr Hawkins added. "Oral history gives a voice to these people and also helps generations to understand each other."

The memories of 94-year-old Joy Wise were the subject of the first interview. "Joy was conscripted to the Hawker Aircraft Company, as it was then called, in 1939 and worked on quality control," Mr Downey, whose project will run until March 2013, said. "In actual fact, her background was in teaching and she was very well spoken, so she ended up giving her fellow workers elocution lessons to help them to 'better' themselves. Regional accents were not as accepted in the workplace as they are today and this is just one example of what life was like for the workers during this time."

Dr Peter Barrington, Head of the School of Aerospace and Aircraft Engineering, said the University was proud to play a large role in the town's aviation legacy.  "Students travel from all over the world to study aviation and aeronautical engineering here at Kingston University. We're the United Kingdom's largest provider in this field and we take our role in the sector very seriously," he said.  The University has just acquired another flight simulator which it will be modifying for teaching.  It is the latest addition to a range of other high specification equipment that even includes a Learjet. "During the past 100 years, Kingston University, in its various forms, has played an enduring part in engineering education in the borough," Dr Barrington added. "Our campus at Roehampton Vale is where these studies take place today and our work with partners, such as Flybe, KLM and Marshall Aerospace, ensures our students are continuing to work at the heart of industry."

To tie in with the aviation history celebrations, field leader in aviation studies Dr Alex Ellin and some of his Kingston University students have been working with Brooklands Museum in Weybridge, Surrey, to build a replica of the famous Sopwith Tabloid - a wooden-framed biplane developed by the Sopwith Aviation Company and adapted to serve in World War I.  "The aircraft won the historic Schneider Trophy in 1914 - a speed competition that, in later years, contributed towards the development of the Merlin engine for the Spitfire, Hurricane and Lancaster. It has been a real challenge to go back and recreate one of these aircraft from the drawings that remain and the photographs of the event," Dr Ellin explained. "We've just finished the fuselage, which we put on display at the festival. This is a fantastic project which has given some final year students a rare opportunity to help build an aircraft from scratch."

The Kingston Aviation Centenary Project has been led by the Hawker Association and funded by the Heritage Lottery Fund.