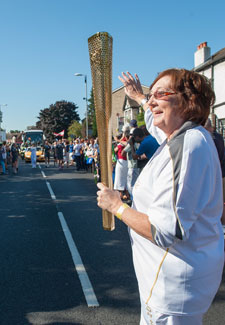 With Olympic fever sweeping the country, the torch relay has made its way to Kingston before embarking on the final leg of its journey along the River Thames to the Olympic Stadium in Stratford.

Passing right in front of Kingston University's Penrhyn Road campus on 24 July, the flame was carried through the Royal Borough by 27 torch bearers.

Reda Vida Gani, 23, ran with the torch before it was passed on to Margaret Loveridge, 58, under the careful watch of Olympic officials just outside the University's Penrhyn Road campus.

One of Kingston University's photographers, Ezzidin Alwan, was on hand to snap the historic moment. "There was such an incredible atmosphere as the torch relay passed the University and it really felt as though everyone there had come together with a tremendous sense of pride," Mr Alwan said. "It's wonderful that the Olympic Games are being hosted in London and to be able to photograph events such as this is a once in a lifetime opportunity. 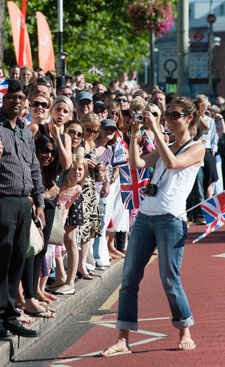 "Event photography is all about capturing special moments in a split second and, as a photographer, to have been able to get such a great picture of the exact moment when the flame was passed on was just brilliant."

The torch convoy set off from the Hook Centre in Chessington and passed through Surbiton town centre before continuing its journey into the heart of Kingston. The procession then made its way out of the borough into neighbouring Richmond.

Spectators who worked up an appetite cheering and waving their flags were invited to buy a bite to eat and refuel courtesy of University caterers Elior, who were on hand with bacon butties and tankards of tea at the campus.

There was a second chance to catch a glimpse of the torch when it sailed from Hampton Court Palace on Friday 27th July. It passed under Kingston Bridge before continuing it's journey to the Olympic Stadium in time for the London 2012 opening ceremony. 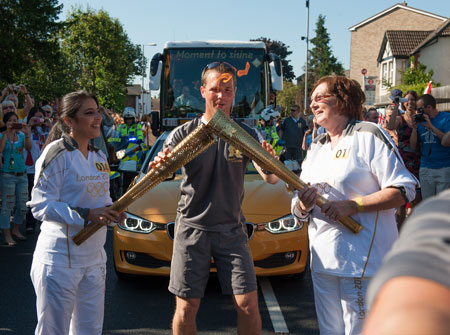