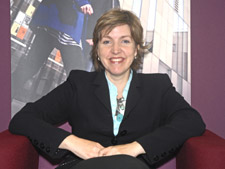 Employers are being urged to help unemployed graduates by taking part in jobseeker 'bootcamps' run by Kingston University.

The bootcamps offer graduates living in the Kingston area a free two-day programme of advice on how to get a job, including sharpening CVs, filling in application forms and interview techniques. The programme has been extremely popular since it was launched in July, with more than 150 graduates being put through their job-seeking paces. Kingston University, which is running the bootcamps from its graduate2business (g2b) service at Penrhyn Road, is now hoping to extend the bootcamps and would like more employers and local professionals to get involved by giving practice interviews and assessing mock presentations.

Janice Chalmers, g2b manager, said the bootcamps helped to counter criticism from business leaders such as Tesco chief executive Sir Terry Leahy who said he was disappointed by the standard of young jobseekers. Mrs Chalmers said: "The bootcamps not only aim to help graduates become more 'job ready' but also to give them something more intangible: confidence to face the daunting graduate recruitment process." She said employers could also benefit by sending staff that needed experience in interviewing and assessing job candidates.

The Kingston and Surbiton MP, Ed Davey, stressed the need for more employers to get involved when he officially launched the service. "Graduates are being hit particularly hard in the recession, that's why this project is so important," he said. "I hope more employers will offer themselves as interviewers and that they will talk to their suppliers and competitors about joining in." He added that it was vital that the economic downturn did not create a "lost generation" of jobless graduates.

Around 75 employers, graduates and representatives including Peter Seddon, a policy adviser for the Higher Education Funding Council for England, attended the launch. The event included the presentation of awards to the top ten bootcamp graduates and a 'speed interviewing' session where graduates took part in four five-minute long interviews.

Ebony Sobo, a Kingston University accounting and finance graduate, was offered a job as a trainee accountant with global software test consultants Sogeti after completing a bootcamp. "Without it I wouldn't have had the perfect CV, and the interview skills session was top notch," Ebony said.

Lauren Southey, 22, a Kingston University business studies graduate, said the bootcamp gave her the confidence that helped her get a job as a trainee recruitment consultant. Lauren said:"I'd recommend the bootcamps to anyone seeking a job, particularly in the current economic climate."

Bootcamps and internships will be running throughout 2010.

The £1m cost of running the g2b service comes from the Higher Education Funding Council for England (Hefce), Kingston University, the Royal Borough of Kingston, Kingston Chamber of Commerce and Kingston College. Funding will run until 30 September 2010.