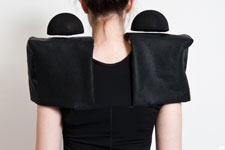 Students from Kingston University's MA Fashion degree have been showcasing their latest collections at London Fashion Week's largest independent event, Vauxhall Fashion Scout. From magnets to muscle tissue and the meeting of cultures, the work has been inspired by a diverse selection of themes.

Jaime Russon from Stamford was intrigued by magnetic trains in China and drew on the idea to create frictionless fashion. Using electro-magnets on the shoulders of two of her womenswear looks, she created floating domes that hovered and spun above the shoulders. "I wanted to make part of my collection weightless like the trains," the 26 year old said. "Clothes wear out because of friction and I wanted to play with this technology to find a way to avoid this problem. The magnets repel the shoulder pads and gently spin in position while the wearer walks." Other looks include magnets that attract, pulling the material up into points on the shoulders. 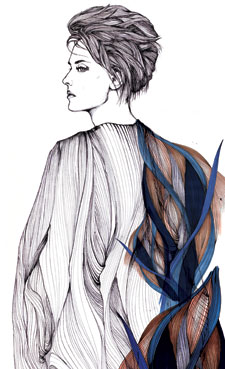 Meanwhile, Stephanie Jayne Price from York was inspired by horse anatomy for her womenswear collection. Her illustrations of muscle tissue were used as screen and digital prints and she even visited horse sculptures in London and Brighton, draping them in calico to test out her pattern-cutting skills.  "In fashion we use human-shaped mannequins all the time for our designs, but I wanted to really push my skills to the extreme," she said. "By using horse sculptures I was able to explore a whole new series of shapes and then see how I could translate these into my collection." Her eight looks included a sculptured bodice made of vegetan, a type of leather that is malleable when wet but holds its new form as it dries allowing Stephanie to mimic the flowing lines of muscle tissue.

Kingston University's academic director of fashion Elinor Renfrew said the graduating students had combined traditional techniques with exciting new ideas. "The collections are uncompromising, brave, humorous and political," she said. "Mayada Khammu, for example, has been inspired by the lives of young Arabs living in the United Kingdom. Her womenswear has the attitude of the street mixed with the craftsmanship of the Bedouin tribes. There are also straps and harnesses, however, which challenge conventionality." 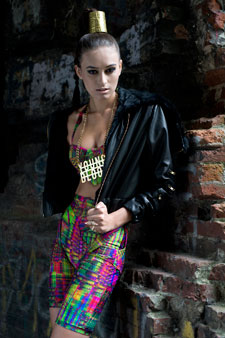 Kingston University's MA Fashion course is in its fourth year. The work on show at Vauxhall Fashion Scout included final year womenswear and menswear collections, exhibits and accessories as well as film footage from industry-sponsored projects. Some of the students even worked with leading fragrance and flavour creation companies, Givaudan, in collaboration with Sense, the charity that supports deaf and blind people, to create concepts to challenge and extend sensory perception. Other projects on display showed the students' take on using bio-materials in fashion. They stemmed from a project sponsored by InCrops, part of the Adapt Low Carbon Group at the University of East Anglia.