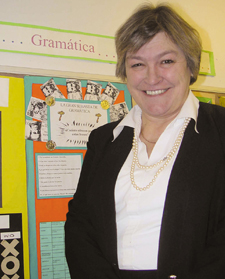 A senior academic, widely known for her pivotal role in training teachers who work in classrooms right across the capital, has died. Cynthia Jones, who had just retired from the post of principal lecturer at Kingston University's School of Education, passed away on 14 September. She was 61.

A qualified psychologist, Mrs Jones joined the University in south west London in 1974. Her early work centred around child development, teaching numerous courses in education and social work as well as undertaking writing and research in these areas. She was also passionate about career development for serving teachers and social workers and pioneered postgraduate qualifications delivered in school settings to help them enhance their skills. This was to become her forte.

Former Kingston University Pro Vice-Chancellor for External Affairs Professor David Miles said the name Cynthia Jones was ubiquitous with professional learning among teachers in the region. "Cynthia was the backbone of in-school teacher training and continuing professional development over many years," he said. "There can't be a school in the Kingston and Surrey area that hasn't benefitted from her dedication and commitment."

Mrs Jones gained her first degree in psychology from the then University College South Wales and Monmouthshire in 1971 and went on to study for a Masters in Social Psychology at Bedford College in 1974. She was a Fellow of the British Psychological Society, active in the British Educational Research Association and a chartered psychologist.

Her enthusiasm for international collaboration saw her share her expertise as far afield as Chile where she led cutting-edge work with teacher trainers. She was also an active member of the European teacher education network, Comenius. Much of Mrs Jones' work focused on enabling teachers to become better-equipped to support children with behavioural, emotional or social difficulties. She had recently worked with a group of European universities to design the Leonardo Da Vinci project to share experiences of special needs education and school leadership across the continent.

Head of Kingston University's School of Education Andy Hudson said Mrs Jones was passionate about the profession and never eased back from wanting to do new things. "Cynthia had an appetite for the innovative and the challenging and often pushed the boundaries of convention. She was blessed with a fine, articulate delivery and an instinct for class participation - she had the capacity to warm, delight and educate groups of any size. She was always on top of her material, current and sharply critical," he said.

During her time at Kingston, Mrs Jones introduced one of the University's first distance learning programmes with the Hornsby International Dyslexia Foundation. It was designed to help teachers working with youngsters with the condition to develop their knowledge. She was also instrumental in developing programmes for teachers working with children with special educational needs in partnership with Surrey County Council's Children's Services.

As well as her work with teachers, Mrs Jones helped train hundreds of social workers during her career, teaching a specially-tailored continuing professional development psychology of teaching and learning module on Saturdays. Acting head of Kingston University's School of Social Work Jane Lindsay described Mrs Jones as an intelligent and rigorous thinker whose warmth and wisdom were inspirational. "Cynthia could hold a whole room spellbound for hours," Ms Lindsay said. "She was a gifted educator who forced people to think critically and analytically and question their practice. She made a huge contribution to the School of Social Work, run jointly by Kingston University and St George's, University of London, and she will be sorely missed by staff and students."

According to Mr Hudson, it was typical of Mrs Jones that, despite retiring in July, she fully intended to carry on working. "Cynthia gave a lifetime's commitment to Kingston University. It's telling that, even post-retirement, it was her intention to teach on in her newly-designed modules for the School of Social Work and manage the European Union-funded Leonardo Da Vinci project," he said.

Mrs Jones is survived by her husband Rob, son Tom and daughter Alys.