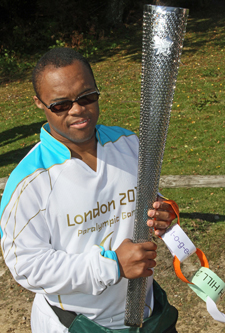 A Paralympic torch bearer has joined people from across the South East, many with disabilities and long term medical conditions, to take up the challenge of climbing Leith Hill near Dorking.

David Stanley donned his white 2012 tracksuit and, Paralympic torch in hand, led the group of more than 140 people to the tower at the hill's summit. The event was organised by Heritage2Health, a collaboration between Kingston University and St George's, University of London, the National Trust and English Heritage. Its aim was to encourage people at risk of social isolation to get involved in activities at countryside and heritage sites.

David, 31, from Merton, has Down's Syndrome and was nominated to take part in the Paralympic torch relay in August for his work promoting the rights of people with a learning disability. He was thrilled to be guest of honour at the Leith Hill challenge.

David's mother Pauline Stanley said the event had been a great opportunity for people to enjoy the outdoors and develop their self-confidence. "Days like this play a really important role in supporting those who face health issues or similar challenges to get out and meet people from all walks of life," she said. "Climbing to the top of Leith Hill may seem a small thing but, for someone with a disability, it can be a real achievement - something they may not have been able to do without the support of Heritage2Health and its nursing and healthcare volunteers. Taking part in activities like this can help people build a sense of value and self esteem." 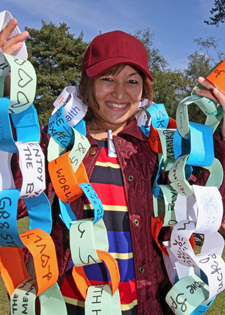 Those taking part in the challenge also worked with contemporary artist Sam Knowles, a Kingston University graduate, to create a time capsule that will be stored in the tower for 50 years. As special guest, David was charged with burying the key to the capsule at the foot of the tower, with the help of Heather Smith, head of access at the National Trust, and Hugh Barr, president of the Centre for the Advancement of Inter-Professional Education. The key will be excavated every 10 years and more items added to the capsule. Challenge participants also designed and embroidered fabric bricks with patterns based on the ancient graffiti covering the tower. The bricks will be assembled to create a three-dimensional collage of Leith Hill.

Theresa Nash, senior lecturer in nursing at the Faculty of Health and Social Care Sciences, run jointly by Kingston University and St George's, University of London, founded Heritage2Health and played a key part in organising the event. "Healthcare workers usually see people with illnesses or disabilities when they're not well," she said. "By bringing health professionals and students together with those with disabilities and long term health issues in a social setting we hope to challenge perceptions and influence the way care is delivered. In the longer term we hope to roll this initiative out right across the United Kingdom and embed it in training for healthcare students."