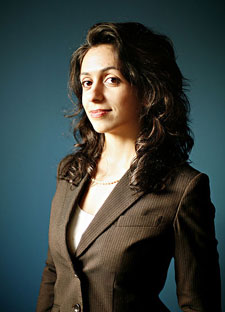 A Kingston University graduate has had a meteoric rise through Norway's political ranks to become the Scandinavian country's new Minister of Culture. Hadia Tajik, 29, studied for a Masters in Human Rights at Kingston from 2004 to 2006. Her appointment by Labour Prime Minister Jens Stoltenberg makes her the youngest Norwegian Government Minister, as well as the first-ever Muslim to serve in the country's Cabinet.

Ms Tajik, who is of Pakistani descent, was born and raised in Norway. A teenage activist, she led the Labour Party's youth wing, the AUF, from the ages of 16 to 19. After completing a degree in journalism and television production at Stavanger University College and a Masters in Law at the University of Oslo, she worked in the news media and as a political adviser before being elected to the Norwegian Parliament in 2009.

Ms Tajik's high-profile appointment is regarded by many commentators as a fitting response to the atrocities committed by right-wing extremist Anders Breivik which rocked Norway last summer. He sent shockwaves around the globe when he bombed Government buildings in Oslo, killing eight, and shot another 69 dead in a rampage at a summer camp organised by the AUF.

Following the Cabinet reshuffle, Ms Tajik publicly pledged to make cultural diversity an integral part of Norway's everyday life. She also stressed that her ministerial programme would secure the protection of minority rights.

Ms Tajik has described her time at Kingston University as a period during which she matured and developed both personally and intellectually. "I remember Professor Brian Brivati urging us repeatedly to think harder during his lectures on the politics of mass murder and understanding human rights," she said. "I now try to live by the notion of thinking harder in my daily work."

Vice-Chancellor Professor Julius Weinberg said he was delighted that a Kingston University graduate had taken on such an influential leadership role. "Hadia's historic appointment is a stunning example of how Kingston University develops people," he added. "As she points out, we are committed to making our students think harder and think smarter. We always say that, with hard work, the determination to succeed and great academic input, anything is possible."