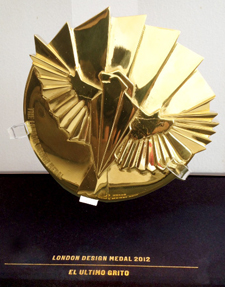 The London Design Festival's awarding committee has bestowed its most prestigious annual prize on internationally-acclaimed designers El Ultimo Grito. Both members of the creative pairing have strong ties to Kingston University.

The London Design Medal is presented to a leader in the field who has made a significant contribution to the profession and to the British capital. This year judges included V&A director Martin Roth and Tate director Sir Nicholas Serota.

El Ultimo Grito was formed in 1997 when Roberto Feo joined forces with Rosario Hurtado. Rosario was, at the time, studying product and furniture design at Kingston University. In 2004, El Ultimo Grito was awarded the first ever design fellowship by the University's Stanley Picker Gallery. The pair used the opportunity to design sculptural prototypes of furniture and model animals that later went into mass production.

Since 2006, Roberto has been a Senior Design Research Fellow at Kingston's Faculty of Art, Design and Architecture. "This prestigious recognition from the London Design Festival is very exciting and we are humbled to have received such an honour," he said. "The award is highly significant in that it acknowledges the breadth of practice in London and also emphasises the importance of design at a prominent level. We hope that our success can inspire the students we teach to pursue their own ways of working. In turn, they can help redefine what design is all about."

Director of the London Design Festival Ben Evans said the judges had been impressed by the importance of ideas in El Ultimo Grito's work. "It is conceptual and provocative," he said. "Their interest is in exploring relationships with objects and culture. Originally from Spain and educated in London, their story is the story of design in London today." 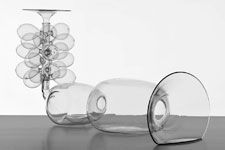 El Ultimo Grito's work is in the permanent collections of MoMA (Museum of Modern Art) and MAD (Museum of Art and Design), both in New York, the Stedelijk in Amsterdam, the Museum of Glass in Shanghai and London's Victoria and Albert Museum, while the duo's commercial clients include British Airways and Marks and Spencer. They also remain extremely influential in academic circles and are currently joint professors at the University of Art and Design in Geneva.

"Teaching and education are very important parts of what we do as designers," Roberto said. "For us, design requires a constant reassessment, a constant questioning of the limits of our activity. Experimental design education is central to this investigation and to promoting a change in design paradigms. All our projects are inter-connected - they are all part of the same essay."

This year El Ultimo Grito have worked on a project called Trastienda ('back shop') for the Laboral Centre for Art and Industrial Production in Gijon in Spain. It explores the way that modern technology enables networks of small businesses to share ideas and skills. They have now moved on to a project looking at new ways of viewing films in cinemas.

"Kingston University is extremely proud of its longstanding relationship with El Ultimo Grito and the impact Roberto and Rosario's work has made within academic and non-academic realms," the University's Director of Design Research, Professor Jane Harris, said. "Back in 2004 it was a far-sighted decision on the part of the Stanley Picker Gallery to select Roberto and Rosario as its first ever design fellows.

"Universities are sometimes accused of being insular. However, this relationship demonstrates Kingston's contribution to the wider design world. El Ultimo Grito have inspired design thinking across wide ranging disciplines and, befitting their ethos, are not really considered mainstream. We're delighted to have played a role in supporting the development of their ideas."